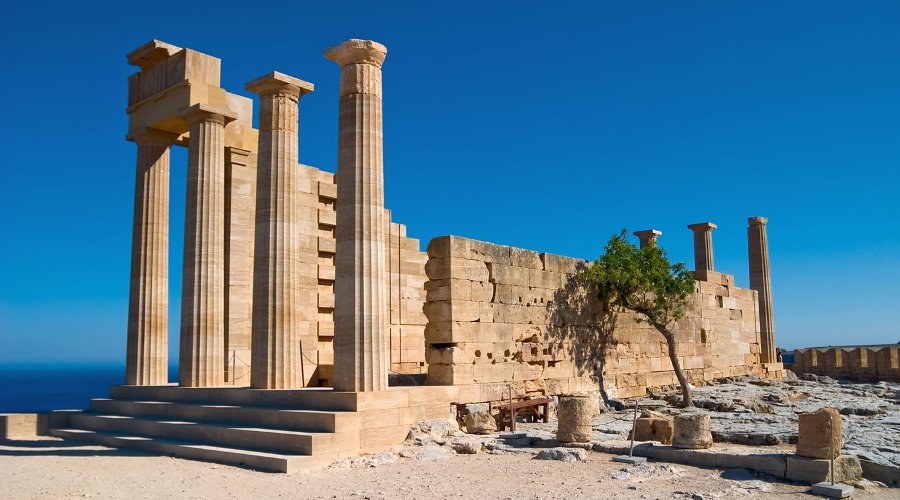 Overall experience of Lindos and the Old town of Rhodes

For those of you that have a full day at their disposal, this is the ideal tour to see all the highlights of the island. You will be be offered private transportation to the archaeological site of Lindos, enjoy a guided tour of Lindos, and then return back to Rhodes for a complete walking guided tour through the Old town of Rhodes.

Lindos was founded by the Dorians, led by the king Tlepolemus of Rhodes, who arrived in about the 10th century BC. It was one of six Dorian cities in the area known as the Dorian Hexapolis. The eastern location of Rhodes made it a natural meeting place between the Greeks and the Phoenicians, and by the 8th century Lindos was a major trading centre. Its importance declined after the foundation of the city of Rhodes in the late 5th century BC.

In classical times the acropolis of Lindos was dominated by the massive temple of Athena Lindia, which attained its final form in around 300 BC. In Hellenistic and Roman times the temple precinct grew as more buildings were added. In early medieval times these buildings fell into disuse, and in the 14th century they were partly overlaid by a massive fortress built on the acropolis by the Knights of St. John to defend the island against the Ottomans.

Above the modern town rises the acropolis of Lindos, a natural citadel which was fortified successively by the Greeks, the Romans, the Byzantines, the Knights of St John and the Ottomans. This makes the site difficult to excavate and interpret archaeologically. The acropolis offers spectacular views of the surrounding harbors and coastline.

On the acropolis of Lindos today parts of the following buildings may still be seen:

After the end of the guided tour of Lindos, you will board your private vehicle and return back to Rhodes and start your complete walking tour of the Old town.

Entering the gateways you will walk parallel to the big fortified wall, with your guide stopping you in some points of interest for further explanations as well as for panoramic views. On the way you will walk through the area of the Agora and the Collachium, where the Knights of St. John of Jerusalem lived and worked, building a stronghold of Christendom in the Eastern Mediterranean. The building of the hospital of the knights of St. John is one of the most impressive and old buildings remaining in the Old town, and houses today the archaeological museum of Rhodes, which is worth for a short visit. Among other things you will see ancient Greek statues, including the Aphrodite of Rhodes, made of parian marble, urns and pots, funerary plaques etc.

Remaining remarkably intact, the Old Town is home to the churches, marble coats of arms of the Knights, cannonballs and the inns of the Knights. Entering the famous Knight Street you will start ascending to the level where the very impressive restored Palace of the Grand Masters lies and you will enter it for your guided tour and detailed explanation of the different historic periods of the island and the palace. There among other things you will see very impressive mosaic floors, several rooms that served the everyday needs of the palace, as well as one of the most famous and well done copies remaining of the complex of the statues of Laotoon, a famous ancient statue which is today kept in the Vatican museum.

At the end of the tour you will be free to use the remaining time you have on the island, walking around, taking pictures and further exploring its magnificent areas on your own.

Tweet
More in this category: « Lindos and a glimpse of the Old town of Rhodes

Highlights
Guided tour of Lindos
Visit Ano Mera
Guided walking tour of the Old Town of Rhodes
Guided tour of the Archaeological museum of Rhodes
Guided tour of the Palace of the Grand Masters
Free time in the Old Town
Duration
8 hours
Entrance Fees
12 p.p. for Lindos Acropolis
6 euro p.p.: Ticket for the Palace
8 euro p.p. for the Museum
10 euro p.p. combined ticket for the Palace and the museum
Children up to 18 y.o. enter for free
Good to know
Travel time: 2 hours
Walking distance: 3000 m.
Total number of steps: 250
Restrooms available: Yes
Shopping available: Yes
Air conditioned: Inside the vehicle
Photo restrictions: No flash photography and no posing inside the museums
Credit cards accepted: Yes
All private tours can be customized further according to your needs and preferences.
We always try, when possible, to start the visit from the least crowded areas depending on where the rest of the crowds will start from.
During summer, Greece can be very hot. It is advised to have with you sunscreen, glasses, hats and dress lightly in order for you to enjoy more the time you will spend outdoors.
Strenuous activity: Requires active participation, walking long distances over uneven and steep terrain or on steps.