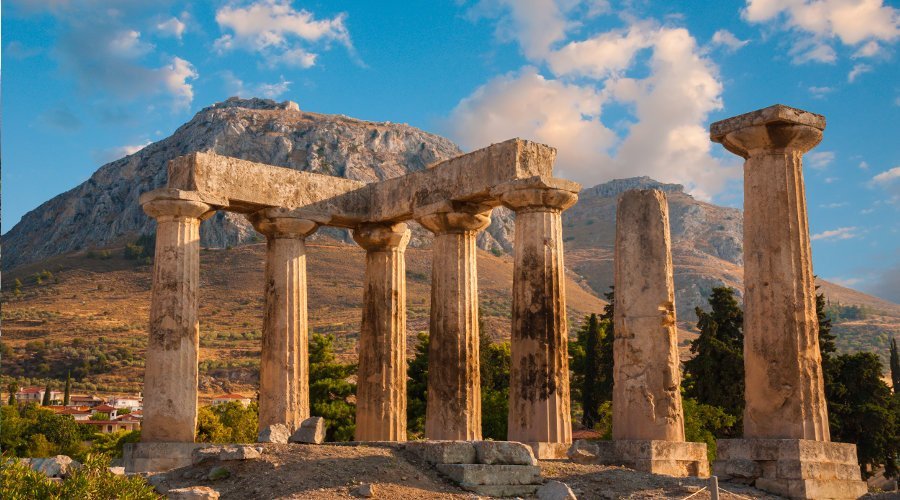 Ancient Corinth and the Canal

CHILDREN UP TO 3 YEARS OLD: FREE

The tour with the licensed tour guide and the bus will start from the port of Piraeus. Officially Piraeus is considered to be a different city, but you can say it is one of the suburbs of Athens.

After a drive through the western suburbs of Athens, you will start having the view of the Saronic Gulf on the one side of the road. First you will see an industrial part of it and the shipyards of Skaramangas. Then you will have the island of Salamis on the one side of the road, as well as the part of the sea, where one of the most famous naval battles in world's history was fought, in 480 BC, between the Athenians and the Persians. On the other side of the road will be mount Aegaleo, from where Xerxis was viewing the naval battle, sitting on his golden throne.

It's a very short drive from there to the ancient site of Corinth, where your licensed tour guide will take you on a detailed exploration of ancient Corinth's site and museum. The impressive Acrocorinth fort was built right on top of where the ancient city used to be. Most of the remaining ruins are from the Roman era, except for the still standing monolithic columns of the temple of Apollo. You will see the Roman Odeon, the Ancient Springs, the Agora, the Bema from where St. Paul preached, the archaeological museum with some extraordinary samples of the Corinthian pottery, as well as the amazing view to the sea and the valley, proving why that city was so important and world famous back then. Among other things it was famous for some of the most corrupted business men that were living in it. The legend of Sisyphus, who cheated even Hades himself, consists the emphasis and example of their way of thinking. That was also one of the reasons why St. Paul decided not only to visit, but to spend 18 months of his life there, preaching about ways of virtuous life.

The impressive Acrocorinth fort, with its walls remaining in most parts in a very good condition, will help you understand even more why in antiquity they used to say that it was one of the "eyes" of the Peloponnese and that whoever would manage to conquer it, would easily be able to conquer the rest of Greece. You will enjoy a short photo stop there and enjoy the amazing view.

At the end of the guided tour you will be taken back to Piraeus port.

This special semi-private tour is available only for cruise ships that spend more than 1 day in Piraeus port.

We need a minimum of 8 participants in order to run this tour. If you are in a party of 8 or more people and are interested in this tour, even if your cruise ship is not listed above, contact us and we will run this semi-private tour for the date you will be in Piraeus port.

Highlights
Guided tour of the Ancient Corinth archaeological site
Guided tour of the Ancient Corinth archaeological museum
Short stop at the Corinth Canal
Duration
5.5 hours
Entrance Fees
8 euro p.p.: Combined ticket for the archaeological site and museum in Corinth
Children up to 18 y.o. enter for free
Good to know
Travel time: 2.5 hours
Walking distance: 1100 m.
Total number of steps: 15
Restrooms available: Yes
Shopping available: Yes
Air conditioned: Inside the vehicle and the museum
Photo restrictions: No flash photography inside the museums
Credit cards accepted: Yes
During summer, Greece can be very hot. It is advised to have with you sunscreen, glasses, hats and dress lightly in order for you to enjoy more the time you will spend outdoors.
Moderate activity: Requires intermittent effort throughout, including walking medium distances over uneven surfaces and/or steps.