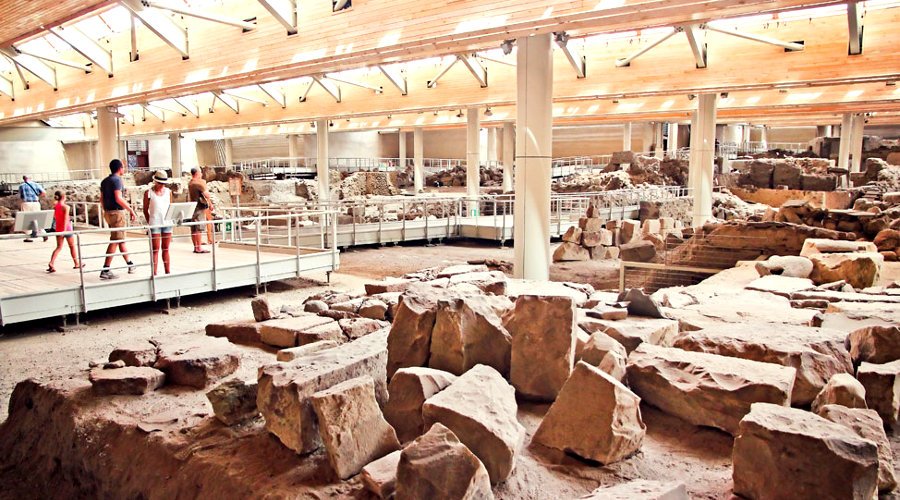 While on the gorgeous island of Santorini, you have to dedicate some of your time to explore the Greek Pompeii, the archeological site of Akrotiri.

It is one of the most important prehistoric settlements of the Aegean. The first habitation at the site dates from the Late Neolithic times (at least the 4th millennium B.C.). During the Early Bronze Age (3rd millennium B.C.), a sizeable settlement was founded and in the Middle and early Late Bronze Age (ca. 20th-17th centuries B.C.) it was extended and gradually developed into one of the main urban centers and ports of the Aegean. The large extent of the settlement (ca. 20 hectares), the elaborate drainage system, the sophisticated multi-storied buildings with the magnificent wall-paintings, furniture and vessels, show its great development and prosperity. The various imported objects found in the buildings indicate the wide network of its external relations.

Akrotiri had a great connection with Crete as well as with the Greek Mainland, the Dodecanese, Cyprus, Syria and Egypt. The town's life came to an abrupt end in the last quarter of the 17th century B.C. when the inhabitants were obliged to abandon it as a result of severe earthquakes. The eruption followed. The volcanic materials covered the entire island and the town itself, which was a good thing to happen after all, because it was this way protected, until the excavations by the famous archeologist Marinatos took place.

Today the parts of the site that have been excavated lie under a large canopy , which protects it, but also makes the visit more pleasant, since you won't have to be exposed to the sun.
Board your private tour, with your local expert and licensed tour guide and enjoy a promenade and trip back in time, for which you will need approximately 1,5 hours.

To complete your experience and knowledge of the amazing Cycladic civilization and ancient Thira and Akrotiri, if you get the chance, you should also visit the archeological museum which lies in Fira. In Athens there is also the Cycladic museum and a hall section of the National archeological museum, where impressive and well preserved frescoes from the houses of Akrotiri have been removed to.