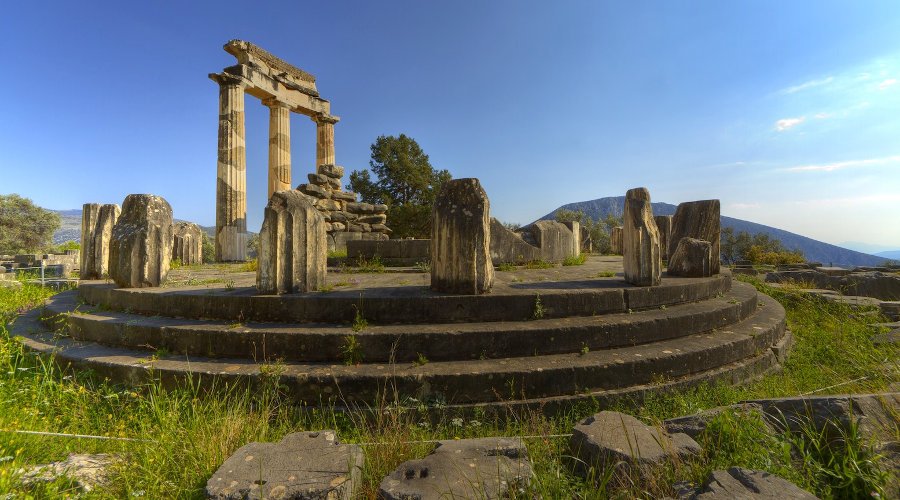 Being in Athens and enjoying all of its great history and monuments, you shouldn't leave without visiting the "naval of the earth", Delphi, a site that has played an extremely important role at the evolution and political situation of ancient Athens and the rest of Greece.

Departing Athens with your private vehicle and driver, you will start heading north towards Delphi. On your way to Delphi your driver will give you information about all the places you will drive by, such as the area where the Marathon battle was fought. It is situated next to mount Pendeli, where all the marble for the constructions on the Acropolis, as well as for some buildings in Delphi, came from. On the 19th century marble from the same quarry was used for the construction of the impressive lake of Marathon which was built in order to provide with water the overpopulated city of Athens and which you will also be able to see as you drive by.

Continuing through the highway you will pass one of the largest planes near Athens and where most of the fresh vegetables for the big city come from. On the one side of it is situated the modern city of Thebes, which was built on top of the ancient one and therefore unfortunately not much remains from that very historical ancient city state, home of the tragedy of Oedipus. Next larger city on your way will be Levadia, built on the foothills of two very impressive rocks, where the oracle of Trofonios used to exist.

Then you will start driving up the mountain of Parnassus, with the scenery becoming much more rocky and dramatic. Many times until May, you can still see snow on the impressive ridges of the mountain, on the other side of which lies a big skiing center. Just before reaching Delphi, you will pass through the traditional village of Arachova, famous for the hand woven flokati rugs as well as its dairy products.

Once in Delphi, you will meet your tour guide and you will be given a guided tour of the museum in which one can see among other archaeological treasures, the unique bronze statue of the charioteer, the sphinx of Naxos, the friezes of remarkable treasury houses as well as remainings of the gold and ivory statues of Apollo and Artemis. Then proceed to the archaeological site and start climbing to reach the level of the Agora, before you enter the sacred way to the Athenian treasury, the stoa of Athens, the rock of Sybil and the temple of Apollo, where the Oracle was. Recently an amazing recreation of the bronze base of the tripod the Greeks had dedicated to the sanctuary after they won the battle of Plataea was placed back to its original position. After the end of your guided tour you will be able to climb higher to the ancient theater or even to the ancient stadium which is at least a 20 minute hike uphill but it's really worth it.

On your way down you can stop and drink water from the ancient sacred Kastalia spring, where all visitors would get purified, before entering the Oracle. Nearby lies the ancient gymnasium, the palaestra and the site of Athena Pronaia, the view of which you will be having from many parts of the site of Apollo and your guide will provide you with information about its history as well.

After your visit in Delphi, for which you will need approximately 2 and a half hours, you can either enjoy some free time for lunch in the town of Delphi or in the village of Arachova which is on your way back to Athens.

Optionally, on the way to Athens, you can extend the tour's duration by making a deviation and a stop to visit the famous monastery of Hosios Loukas, a UNESCO monument of the 10th century AD.

Tweet
More in this category: « Ancient Corinth and the Canal Full day tour to Argolis »

Highlights
Guided tour of the Delphi archaeological site
Guided tour of the Delphi archaeological museum
Visit Arachova village
Optional visit at Hosios Loukas monastery
Duration
9 hours
Entrance Fees
12 euro p.p.: Combined ticket for the archaeological site and museum in Delphi
Children up to 18 y.o. enter for free
Good to know
Travel time: 5 hours
Walking distance: 2700 - 3100 m.
Total number of steps: 90
Restrooms available: Yes
Shopping available: Yes
Air conditioned: Inside the vehicle and the museum
Photo restrictions: No flash photography and posing inside the museum
Credit cards accepted: Yes
All private tours can be customized further according to your needs and preferences.
We always try, when possible, to start the visit from the least crowded areas depending on where the rest of the crowds will start from.
During summer, Greece can be very hot. It is advised to have with you sunscreen, glasses, hats and dress lightly in order for you to enjoy more the time you will spend outdoors.
Strenuous activity: Requires active participation, walking long distances over uneven and steep terrain or on steps.