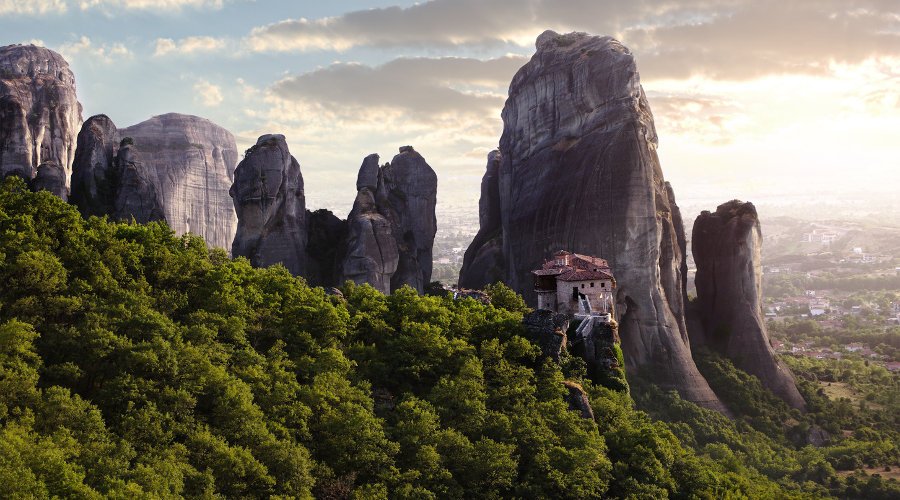 Day 1: Your private vehicle and driver will come and pick you up from your hotel in Athens. On your way to Delphi your driver will give you information about all the places you will drive by, such as the area where the Marathon battle was fought. Once in Delphi, you will meet your tour guide who will offer you locally a guided tour of the museum in which one can see among other archeological treasures, the unique bronze statue of the charioteer. Then proceed though the sacred way to the Athenian treasury, the stoa of Athens, the temple of Apollo, where the oracle was and the theater. On your way down you can stop and drink water from the ancient sacred Kastalia spring, where all visitors would get purified, before entering the Oracle. Nearby lies the ancient gymnasium and the site of Athena Pronaia. After your guided tour in Delphi, you will have lunch in Delphi before starting your drive north to Kalambaka driving by the central Greece towns of Amphissa, Lamia and Trikala. Overnight in Kalambaka.

Day 2: After having breakfast at your hotel, you will visit one of the most amazing places in Greece, Meteora. Meaning "suspended in air" the name Meteora soon came to encompass the entire rock community of 24 monasteries, the biggest and most important group of monasteries in Greece after those in Mount Athos. There were no steps and the main access to the monasteries was by means of a net that was hitched over a hook and hoisted up by rope and a hand cranked windlass to winch towers overhanging the chasm. Monks descended in the nets or on retractable wooden ladders up to 40m long to the fertile valleys below to grow grapes, corn and potatoes. Each community developed its own resources and by the end of the 14th century, the Grand Meteoron emerged as the dominant community. The rock monasteries have been characterized by UNESCO as a unique phenomenon of cultural heritage. You will enjoy a local private guided tour of two of the six monasteries. Then you will start your drive back to Athens. On the way you will stop to visit the monument of Leonidas where the 300 Spartans fought against the Persian army at Thermopylae (Hot Gates). Continuing your journey, on the way you will have a panoramic view of the lake of Marathon. It is not possible to stop but you will be able to take pictures as you drive through. Return to Athens and drop off at the place of your preference.

Highlights
Private guided tour of the Delphi archaeological site
Private guided tour of the Delphi archaeological museum
Private guided tour of the monasteries in Meteora
Duration
2 days
Entrance Fees
12 euro p.p.: Combined ticket for the archaeological site and museum in Delphi
Children up to 18 y.o. enter for free
3 euro p.p.: Ticket for each monastery in Meteora
Good to know
Travel time: Average 6 hours per day
Walking distance: Average 2500 m. per day
Restrooms available: Yes
Shopping available: Yes
Air conditioned: Inside the vehicle and the museums
Photo restrictions: No flash photography and posing inside the museums and monasteries
Credit cards accepted: Yes
All private tours can be customized further according to your needs and preferences.
During summer, Greece can be very hot. It is advised to have with you sunscreen, glasses, hats and dress lightly in order for you to enjoy more the time you will spend outdoors.