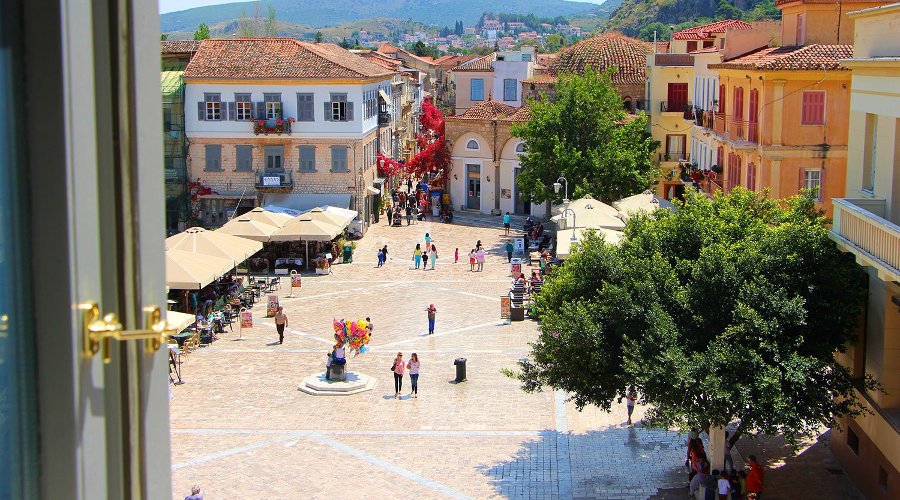 Experience this majestic city, the first capital of modern Greece, through this walking tour, which will be offered to you by a local expert, a licensed tour guide. You will be met at the area where the ship's tenders will drop you off and will start your tour.

Nafplion is a city that combines a long history from the ancient times until today, but the most important parts of it have to do with its architecture and role during the Venetian occupation, which was when the old city was mainly designed and built the way you will experience it. Nafplion was one of the very few cities that were not occupied for long by the Turks, who were occupying Greece for 400 years. When modern Greece started getting organized after the end of this occupation, Nafplion was chosen to become the first capital, after a few months that the capital was the island of Aegina.

Being at the port you will be impressed by the view of this beautiful city, full of neoclassical buildings in different impressive colors and the two forts standing out in the background and on top of it. Your guide will walk you directly to where the city limits used to be, when on the 18th century the walls of the forts used to come all the way down to the sea, making the city impregnable. From there you will imagine that you are back in the ancient times and you will enter the city from the land's gate, which still stands along with the very impressive lion's coat of arms. All over the city's walls this emblem used to exist during the long period of time that the city of Nafplion was under the Venetian occupation, symbolizing their power.

Continuing your walking tour, you will reach a higher level of the old city and the church of St. Spyridon, one of the many churches there are, but with great significance in the Greek history since outside it was where Ioannis Kapodistrias was murdered and the scar on the wall from the bullet still remains. Proceed from there to the very impressive Sydagma square, a square all paved with shiny and impressive marble, and see around you gorgeous neoclassical buildings as well as Turkish baths that now consist the small movies theater of the city. The building of the archaeological museum really stands out. On Mondays it is closed, but any other day it's really worth a visit. Your licensed tour guide will present the highlights of it to you, which are displayed in two separate floors. Among other things you will see Mycenaean pottery, tools and utensils, as well as the oldest Mycenaean armor in the world which is so well preserved and dates from the 15th century BC.

It would really worth your time to enter with your guide and have a guided tour of the Greek orthodox church of Panaghia(Virgin Mary), dating back to the 15th century AD and see among other things the impressive wall paintings and portable icons, many of them decorated with silver and gold offerings that people with deep faith are dedicating to the saints.

Your tour will continue back in the crowded city center at one of the most popular alleys with the tourist shops, where among other things you can visit a store that sells traditional products and olive oil, and a store which is also a workshop of leather sandals and you can have a brief description of the traditional way they make them.

Nafplion is also famous for the several stores where they sell kombolois. Whether on the street or in a busy kafeneion downtown, you will find people playing with their worry beads(kombolois) in different manners, flips and tricks, thus letting go of their stress and worries as one bead moves deliberately towards the other. The pleasure of the action and the clicking noise of the beads turns the overall performance in an easy motion that is reported to help ease tension. It is also said that this action can be of big help for those that would like to quit smoking, but to tell you the truth I have seen many times people holding a komboloi on one hand and a cigarette on the other. You will visit the komboloi museum and you will learn more about its origin, its evolution, the way of making it as well as how many different stones or materials can be used for a komboloi to be made and for a komboloi to either cost a few euros or thousands of euros a piece. On the top floor they also have a small room where they display some old and precious pieces of komboloi.

End your tour with a totally different vibe. Visit a traditional liquor store owned by a local lover of wines and spirits, with deep knowledge of many things about their qualities and best regions to get them from. You will sit on the main hall, surrounded by huge shelves full of different labels of Greek wines, cognacs, but also the famous ouzo and you will enjoy listening to everything he has to tell you before you enjoy your tasting of a few of these wines and spirits.

From there you can walk back to the port either with your guide, or on your own, so that you can explore the city more now that you know so much about it, or go dine at one of the local restaurants there are. Your guide can give you tips and suggestions on how to make good use of your time.

For lovers of sea food that have more time at their disposal and would like a unique experience of Nafplion, we could arrange for you a meal that every local would want to have at the end of their day. Visit a famous old restaurant by the port, with a view of the sea, where you will taste the traditional fish soup which the locals call "kakavia". Different kinds of fresh fish and shells along with fresh vegetables and extra virgin olive oil are cooked on a way that only a few know so well, a true feast of senses!

Highlights
Guided tour of the archaeological museum
Visit of a liquor store and tasting
Visit of the komboloi museum
Duration
3 hours
Entrance Fees
6 euro p.p. for the archaeological museum
5 euro p.p. for the komboloi museum
Good to know
Travel time: 0
Walking distance: 2200 m.
Total number of steps: 120
Restrooms available: Yes
Shopping available: Yes
Air conditioned: Inside the museums
Photo restrictions: No flash photography and no posing inside the museums
Credit cards accepted: Yes
All private tours can be customized further according to your needs and preferences.
We always try, when possible, to start the visit from the least crowded areas depending on where the rest of the crowds will start from.
During summer, Greece can be very hot. It is advised to have with you sunscreen, glasses, hats and dress lightly in order for you to enjoy more the time you will spend outdoors.
Moderate activity: Requires intermittent effort throughout, including walking medium distances over uneven surfaces and/or steps.