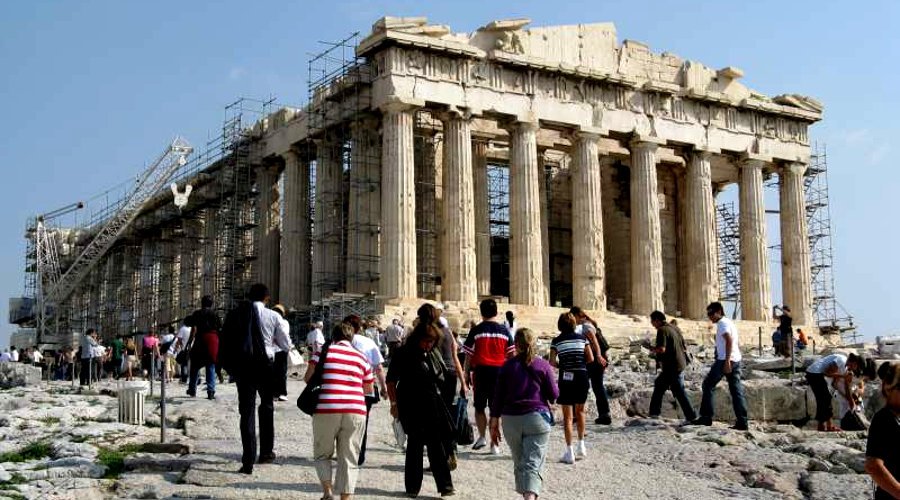 In Athens there are so many things to see and places to visit. I have chosen to mention some extra details below on some of the most popular places to see but there are so many special archaeological sites, museums and churches to explore that a licensed tour guide could really help you make the most of your visit there. The opening hours of these sites, museums and monasteries are subject to continues changes and you can contact us, giving us the date of your visit, so that we provide you with the exact opening hours.

The highlight of course is the Acropolis Hill. Your guide will meet you right by the entrance of the site, and will start ascending with you to the top of the hill, finding the best spots on the way up to stop and help you visualize the Golden Age of Pericles which was when most of the monuments on the hill were built. Climbing up you will see and hear explanations about the Filopappos hill, the Herodium odeon, the Dionysius theatre, the Pnyx hill - birthplace of Democracy and the Areopagus hill. Stopping before the Propylaea, you will have an excellent view of the temple of Wingless Nike and the Ancient Agora, where Socrates, Plato and Aristotle introduced great philosophical schools. Walking through the Propylaea you will reach the top and you will see the breathtaking Parthenon and the Erechtheion temple opposite it, where the Karyatides stood instead of columns to support the roof.

For the private guided tour of the Acropolis Hill you will need approximately 1.5 hours.

The New Acropolis Museum is characterized as one of the best museums in the world and there you will see parts of the excavations of the ancient city through its glass floor, an amazing exhibition of "Kores" and "Kouroi" statues, the Karyatides e.t.c. As you will be ascending the different levels of the museum, you will reach the top floor, all glass, where admiring the remaining pediments and frieze of the Parthenon, you will also have an excellent view of the Parthenon itself. This is the next best view of the Parthenon, if any of you for any reason would prefer to not climb up the Acropolis hill.

For the private guided tour of the New Acropolis Museum you will need approximately 1.5 hours.

Probably one of the most important and completed in ancient art collections in the world museum. The building itself is a historical monument and in its two floors and several different sections one can see the prehistoric collection from Sesklo and Dimini, Cycladic art idols and utensils, the 14 kilograms of golden artifacts of the treasure that Schliemann excavated from the grave circle of the Mycenaean citadel, the Amphora of Dipylo, the astonishing bronze statue of Zeus (or Poseidon perhaps?), several marble tombstones, the bronze running horse and its rider which was found in the shipwreck of Artemisio, several other bronze and marble statues from all around Greece, Roman sculptures, an Egyptian collection and on the first floor the very impressive frescoes from Santorini and a one of the largest collections of the world in pottery.

For the private guided tour of the National Archaeological Museum you will need approximately 2 hours.

The Agora was the heart of ancient Athens, the focus of political, commercial, administrative and social activity, the religious and cultural centre, and the seat of justice. There among other things you will see the temple of Hephaestus, which is one of the most well preserved classical temples in Greece, the foundation of the round Tholos, the Mitroon, pedestals of statues of great importance, the Gymnasium, remainings of different portiques, one of which, the Stoa of Attalos, was fully reconstructed by the American School of Archaeology and houses the very interesting museum of the Agora with a lot of utensils and pottery of everyday life, as well as the marble "machine" that was used to elect the 500 members of the parliament and some of the clay "ostraka" on which the Athenians were voting for the people they wanted to expel from their city, several of which have the name of Themistocles written on them.

For the private guided tour of the Ancient Agora and its museum you will need approximately 1.5 hours.

Other places of great interest are:

Tweet
More in this category: Private local tour of Olympia »

Our team of excellent associates, born and raised in Athens, will be able to offer you a unique experience, through all the important monuments and back streets of Athens, giving you the chance to add as much to it as you like, choosing one or more of the sites or activities below to be added to your tour. When requesting a custom walking tour, please provide us with the following details in order for us to be able to help you design the best way, your Athens cultural exploration.