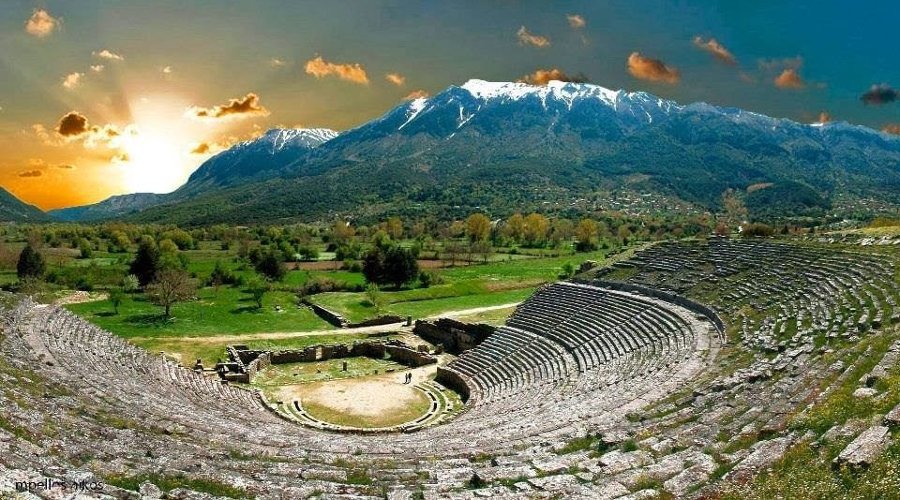 The archaeological site of Dodoni lies 22 kilometers southeast of Ioannina in an amazing beautiful scenery. It is considered as one of the most important sites in Epirus, which was dedicated to Zeus. It was originally an oracle and later on a theater, even larger than the one in Epidaurus, with the capacity of 17.000 people, which is still being used every summer, for a local festival with several performances being held there.

The rest of the Dodoni site is not as visually exciting as the theater since only the rectangular foundations of the buildings remain to outline an enormous complex of temples, hostels, granaries and other buildings. Dodoni is a complex archaeological site because it remained a vital center from about 2000 BC and flourished well into the Roman times. Thus there are many layers of history that the archaeologists have been excavating. You will be able to walk through most of the ancient buildings and enjoy a guided tour with your licensed tour guide. Among other things you will see the theater, the stadium, the vouleftirion, the prytanion and the remains of the wall of the sanctuary of Zeus, where the sacred oak tree was, from which the priests were collecting branches that would help them give their predictions. Another tree was planted at the same place, so make sure that after the end of your tour, you spend some of your free time there, seating down and visualizing what was going on then, hearing the leaves of the oak tree trembling from the wind.

As a religious sanctuary Dodoni was adorned with all the riches that ancient people could afford, and excavations have unearthed a multitude of artifacts that date back to archaic times. Most of the important findings are housed at the National Archeological Museum in Athens, while some reside in the archeological museum at Ioannina.

For this guided visit with a licensed tour guide you will need approximately 45 minutes and then you can spend as much free time as you like further exploring the ruins and taking photographs.