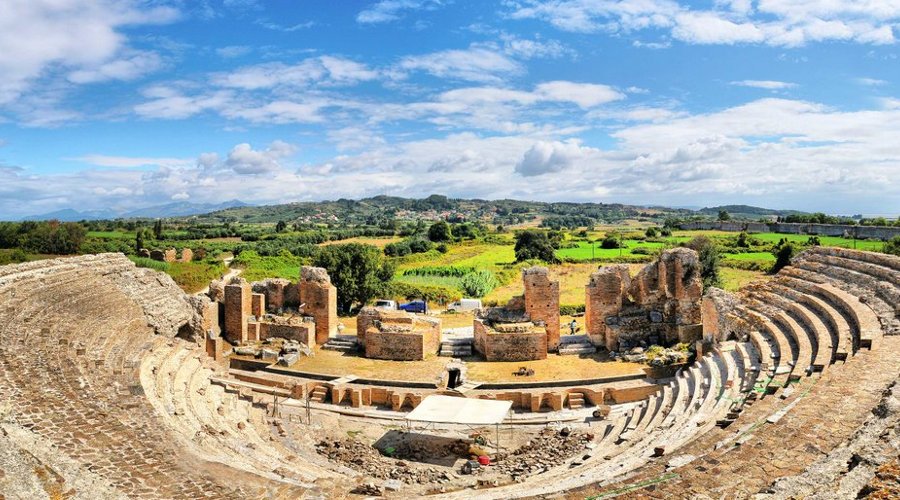 Nicopolis (the "victory city"), located 8 km north of Preveza, is an archaeological site of great significance.

Nicopolis was founded by the Roman Emperor Octavian, to commemorate his victory against Marc Antony and Cleopatra VII of Egypt at the naval battle of Actium (31 BC). It was built on a "nape" 3.5 km wide between the Mazoma lagoon at Amvrakikos Gulf and the Ionian Sea.

During Roman and Early Byzantine period, it flourished as the capital of the province of Old Epirus.

Enjoy a private guided tour of the site and the museum of Nicopolis with your licensed tour guide who will bring the fascinating history of the area to life.

Within the archaeological site you will see the Roman fortifications, the Odeon and the Theater, the Monument of Emperor Octavian, the Nymphaion, Byzantine walls, basilicas of the early Christian era and the so-called "Vassilospito" ("King’s House"), a Roman edifice also used during the Christian era.

The new Archaeological Museum of Nicopolis which was founded in 2009 lies just beyond the archaeological site and it displays fascinating exhibits of the long lasting existence of the city in both Roman and Early Christian times. Among other things you will see roman statues and an interesting explanation of the naval battle of Actium, as well as the different phases of evolution of the city itself.

For this private guided visit of both the site and the museum with a licensed tour guide you will need approximately 1 hour and 40 minutes and then you can enjoy some free time, taking pictures of the beautiful landscape and the ruins.