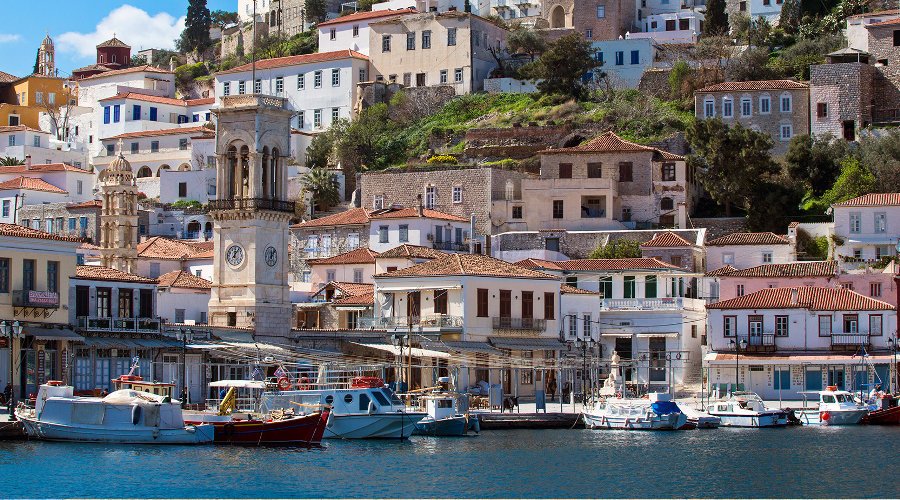 Experience three of the most beautiful Argo-saronic Islands with this one day cruise.

The Greek islands are famous all over the world. There are so many of them though! For those of you that have limited time in Athens, but still would like to get a glimpse of the Greek islands, this is the ideal day excursion.

Staying time on each island

A beautiful small island but so large in history and unique characteristics that distinguishes it among so many. It's one of the few places in the world where there are no roads appropriate for vehicles but only for their traditional mean of transportation, the donkeys.

The role of the island and its people during the revolution of 1821 by the Ottoman Empire and modern history makes Hydra one of the most popular touristic destinations.

Elegance, tradition and majesty. The architecture of the island has kept until our days, intact and inviolable by modern interventions, thanks to the sacrifices of all the Hydrants, who religiously keep this unique legacy that surrendered by their ancestors.

The absence of any wheelset from the island is still uniqueness within so many others we meet in Hydra.

It is a unique experience to walk carefree on cobblestone streets, enjoying the splendid mansions – forts, built by the great Hydrants ancestors, to discover at every step churches full of history and seeing the unique blue sea, away from noises of contemporary life and smell the clear atmosphere.

Therefore it's really worth to spend some time and enjoy a coffee right next to the water on this beautiful island.

Approaching Poros by ship, you can see from a distance the History Clock, which stands out on the highest hilltop, between prickles and pine trees. From here the view of the harbor and the opposite coasts is excellent. It was built in 1927 and still remains the jewel of the island.

Poros is the island of peace, romance and relaxation. It is overgrown with pine trees which reach the rugged shores or the sandy beaches.

The people of Poros are like all islanders in Greece, spontaneous, decent and hospitable. The beach houses are large neoclassical buildings, opposite one to another. The first houses were built in 1463 in the area around the Clock.

In the center of the town are located the Town Hall, the Archaeological Museum and the Exhibition Hall.

Among the narrow streets of Poros and the white houses, full of bougainvilleas, are found many taverns. Among the pier, the visitor can see several tourist shops, cafes and a lot of bars with Greek and foreign music.

Leaving from the town northwest one can find the first residence of King Othon. There today is housed a nautical school.

Continuing further and passing the canal there is one can see the settlement that was first inhabited by refugees from M.Asia in the beginning of the 20th century. After the settlement and following the windy road among big pine trees, we arrive at the chapel of Agia Zoni, which is celebrated on July 2, locatel between a canyon with trees and streams. Closeby is also the chapel of Prophet Elias.

The mythological tradition wants Aegina to have taken its name from the nymph Aegina. The nymph Aegina was daughter of Asopos River and Metopis. Prior to the creation of this myth the island had many names such as Inoni, Inona or Inopiia. Zeus fell in love with Aegina. The king of Olympus, in order to avoid, Hera, tranformed himself into an eagle and carried Aegina to the so far uninhabited Inoni. The fruit of Aegina's and Zeus' passion was Aeakos the first king of the island. Aeakos asked Zeus to give him subjects and so he transformed the ants of the island into humans for his skae. The first inhabitant of the island were called Myrmidones, from the Greek word "myrmigi" which means ant.

The highlight of Aegina is the temple of Aphaea, located on the top of pine covered hill in the northeast part of Aegina. It is the greatest monument that survives from the sanctuary, which was dedicated to Aphaea and was built in the Mycenaean age. According to legend, the nymph Aphaea was persecuted by the Cretan king Minos and in her attempt to escape jumped into the sea, where a fisherman rescued her and took her to Aegina. Once there she disappeared (Aphaea means Disappeared) in the place where now stands the sanctuary. When the atmosphere is clear, from the temple you can see the Temple of Poseidon at Sounio and the Acropolis of Athens. The three temples form one triangle (the holy triangle of ancient times).

The church of St. Nektarios

In this grand Christian Byzantine church, is the silver tomb with the relics of St. Nektarios. Opposite the monastery can still be seen the ruins of the old capital, the medieval capital of the island where the local population was seeking shelter during the pirate raids.

Highlights
Visit Hydra island (1.5 hours)
Visit Poros island (50 minutes)
Visit Aegina island (2.5 hours)
Duration
12 hours
Entrance Fees
No entrance fees
Good to know
Travel time: 6 hours 40 minutes
Walking distance: Depending on what you will visit
Total number of steps: Depending on what you will visit
Restrooms available: Yes
Shopping available: Yes
Air conditioned: Inside the boat
Photo restrictions: No restrictions
Credit cards accepted: Yes
During summer, Greece can be very hot. It is advised to have with you sunscreen, glasses, hats and dress lightly in order for you to enjoy more the time you will spend outdoors.
Light activity: Very light activity including small distances to walk and may include some steps.