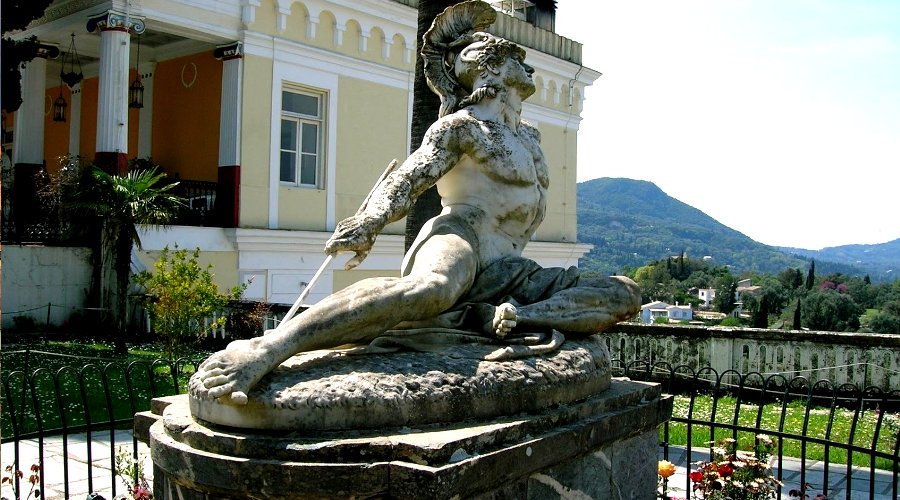 Departing from Corfu’s port, you will drive to Kanoni, from where you can enjoy the excellent views of the picturesque Mouse Island and Vlacherna Convent which is linked to the mainland by a causeway. Mouse Island was formed, according to legend, when the ship of Odysseus that took him back to his homeland Ithaca, was turned to stone. The god of the sea Poseidon was angry at Phaeceans because they defied him.

Then you will drive to the village of Gastouri and visit the Achillion Palace, which was built at the end of the 19th century by the Empress Elizabeth of Austria (known as Sissy) on land bought during a visit to Corfu. This large neoclassical building has three floors adorned with many statues and paintings and is surrounded by vast gardens that are decorated with many statues, the most famous of which are the two bronze runners, the dying Achilles and the statue of Achilles Triumphant. After the assassination of Empress Elizabeth, Kaiser Wilhelm II of Germany bought the palace and used it as a place for relaxation. All of the rooms contain personal items of the former owners and their original furniture.

After the visit of Achillion, you will drive to a famous winery of Corfu, the Theotoky Estate. There you will enjoy a tour of the winery and have a chance to taste some of the most famous wines of Corfu.

Highlights
Visit Kanoni
Visit the Achillion Palace
Visit the Theotoky Estate winery
Free time in Corfu old town
Duration
6 hours
Entrance Fees
8 p.p. for the Achillion Palace
6 p.p. for the Achillion Palace for children 4 - 18 y.o.
Children up to 4 y.o. free
Good to know
Travel time: 1 hour 50 minutes
Walking distance: 2100 m.
Total number of steps: 150
Restrooms available: Yes
Shopping available: Yes
Air conditioned: Inside the vehicle and the museum
Photo restrictions: No flash photography and no posing inside the museums
Credit cards accepted: Yes
All private tours can be customized further according to your needs and preferences.
We always try, when possible, to start the visit from the least crowded areas depending on where the rest of the crowds will start from.
During summer, Greece can be very hot. It is advised to have with you sunscreen, glasses, hats and dress lightly in order for you to enjoy more the time you will spend outdoors.
Moderate activity: Requires intermittent effort throughout, including walking medium distances over uneven surfaces and/or steps.