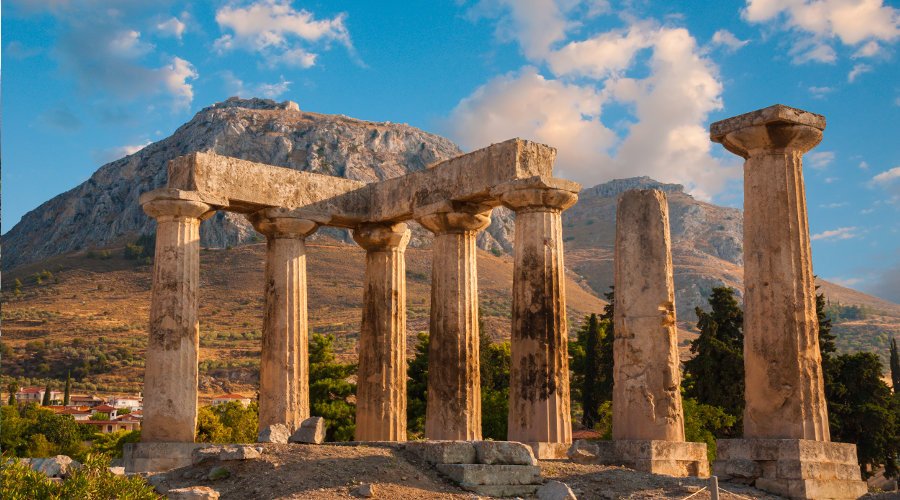 Ancient Corinth and the Canal

Your driver will be meeting you at the lobby of your hotel in Athens and you will board your private vehicle and start your tour.

After a drive through the western suburbs of Athens, you will start having the view of the Saronic Gulf on the one side of the road. First you will see an industrial part of it and the shipyards of Skaramangas. Ancient Eleusis, famous for the sanctuary of Demeter and the Eleusinian mysteries, that remain a mystery even today, will be on your way and can be part of your tour, if you choose to have the extended 7 hour tour. Unfortunately all the development of the industrial area today as well as the modern city of Eleusis does not really show the beauty of the landscape as it was described to be in the ancient times. In Eleusis you can see an interesting site and an archaeological museum with beautiful statuary from the classical days. From there started the procession of the Eleusinian mysteries, all the way to the Parthenon, every time the Panathenaia festival was being celebrated in Athens.

It's a very short drive from there to the ancient site of Corinth, where your licensed tour guide will be waiting for you to greet you and to take you on a detailed exploration of ancient Corinth's site and museum. The impressive Acrocorinth fort was built right on top of where the ancient city used to be. Most of the remaining ruins are from the Roman era, except for the still standing monolithic columns of the temple of Apollo. You will see the Roman Odeon, the Ancient Springs, the Agora, the Bema from where St. Paul preached, the archaeological museum with some extraordinary samples of the Corinthian pottery, as well as the amazing view to the sea and the valley, proving why that city was so important and world famous back then. Among other things it was famous for some of the most corrupted business men that were living in it. The legend of Sisyphus, who cheated even Hades himself, emphasizes and exemplifies their way of thinking. That was also one of the reasons why St. Paul decided not only to visit, but to spend 18 months of his life there, preaching about ways of virtuous life.

At the end of the guided tour and before returning back to Athens, you will enjoy a short visit for photographs at the impressive Acrocorinth fort, with its walls remaining in most parts in a very good condition, will help you understand even more why in antiquity they used to say that it was one of the "eyes" of the Peloponnese and that whoever would manage to conquer it, would easily be able to conquer the rest of Greece.

From Ancient Corinth it is a very short drive to the ruins of the ancient port of Kechries where St. Paul embarked his ship after preaching to the Corinthians to get to Ephesus. You will have the chance to make a short stop there, before returning back to Athens.

Tweet
More in this category: Full day tour to Delphi »