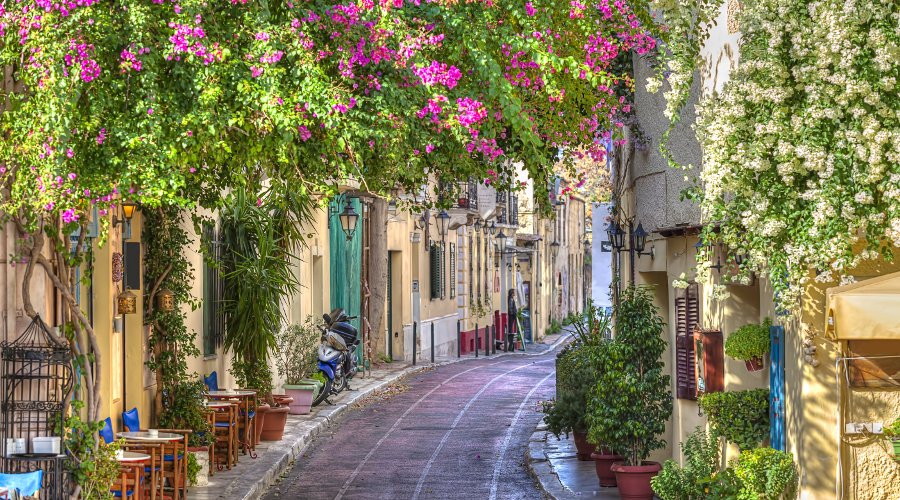 We are proud to introduce to you our premium Athens tour, which combined in a full tour, includes the most popular Athenian highlights. Athens is a city with some of the most important worlds history, great architecture, "hidden" old districts, some of the best museums in the world and of course a lot of great restaurants where someone can taste the famous Greek cuisine.
We have designed this exclusive tour, for the travelers that want to learn and experience everything off the beaten track , on a more personal  way than being in a large group , getting  the  feeling of being on a private tour, although you pay for a shared one.

Maximum 18 people per guide, a luxurious and agile minibus and one of our carefully selected excellent professionals, a licensed tour guide who will augment your experience. There might be huge crowds around you and long lines for the tickets, but you will be in this small group, your Acropolis entrance tickets will be bought for you in advance and your guide will do everything possible to modify the order of your itinerary's  visits, so that you will avoid the crowds as much as this is possible. You will pay the cost of the entrance tickets to your guide afterwards.
This is the perfect tour for people that only have one day in Athens with several benefits, such a of being able to move around easier, with more flexibility and with your guide being there for all of you and answering everyone’s questions.

Except for visiting the Athens Highlights, the Parthenon and the Acropolis museum, you will also enjoy a walking tour pass the Areopagus (Mars Hill),  Plaka and Monastiraki, an overview of the Ancient Agora, the Roman Agora, the Anafiotika district ,as well as a dining experience at one of the most typical tavernas of "Old Athens". The dining experience will include typical and popular Greek dishes, as well as the famous baklava for dessert.

The tour with the licensed tour guide and the private vehicle will start from the port of Piraeus. Along the way you will keep seeing and hearing explanations about the different parts of Piraeus and Athens, such as the Kastela and Mikrolimano ports. Since Athens hosted the Olympic Games in 2004 and most of the Olympic settlements were located on the southern suburbs of it, you will cross an Olympic Venue and you will follow an open free way that will bring you right at the center of Athens. While being amazed by the first views of the Acropolis and the Parthenon as you will be driving though the city, you will also be impressed by the view of the massive remaining marble Corinthian columns of the temple of Zeus which still stand in the triangle between the Acropolis, the Panathenaic stadium and the Zappion Mansion which in 1896 was the Olympic Committee building. Next comes the Panathenaic marble stadium of the 1896 Olympics where you will stop for photos or even for an inside visit. The sightseeing will proceed passing the Parliament house, the Sydagma square, the Athenian Trilogy consisted by the Academy, the Library and the University buildings, the semi-byzantine building of the first eye clinic building in Europe and the church of St. Dionysios which is the Metropolis of the Catholic church in Athens. The drive will proceed through the Stadiou Avenue and the other side of Sydagma square, the Arch of Hadrian and will either end nearby so that your walking tour will begin.

It is 156 meters to the top of the Acropolis and most of the ancient marble paths are still there, for you to walk on and  "travel" with your imagination, back in the glorious "Golden Age of Pericles", when most of the Classical period monuments you will admire were built. Climbing up you will see and hear explanations about the Filopappos hill, the Herodium Odeon, the Dionysius theatre and the Pnyx hill - birthplace of Democracy.

Stopping before the Propylaea, you will have an excellent view of the temple of Wingless Nike and the Ancient Agora, where Socrates, Plato and Aristotle introduced great philosophical schools. Walking through the Propylaea you will reach the top and you will see the breathtaking Parthenon and the Erechtheion temple ,where the Karyatides stood supporting  the roof. Walking down you will have another beautiful view of the Ancient Agora and parts of Plaka, as well as the Observatory of Athens.

On the way down your guide will walk you closer to Areopagus, so that you will be able to see from close the rock that once used to be among other things the Bema of St Paul.

Next comes the visit of The New Acropolis Museum, characterized as one of the best museums in the world, where you will spend approximately 1 and a half hour, seeing parts of the excavations of the ancient city through its glass floor, an amazing exhibition of "Kores" and "Kouroi" statues, the Karyatides e.t.c. As you will be ascending the different levels of the museum, you will reach the top floor, all glass, where admiring the remaining pediments and frieze of the Parthenon you will also have an excellent view of the Parthenon itself. This is the next best view of the Parthenon, if any of you for any reason would prefer to not climb up the Acropolis hill.

Around Plaka and Anafiotika, both located next to the Acropolis, are some of the most reputable and old tavernas in Athens, popular to all visitors that first come to Athens, but also to all Athenians, that every chance they get, they will "get away" from the busy modern Athens, to "travel" to a district that reminds them of the alleys of their home villages or the islands. You will see that once you get there, you will get the feeling you are not in current Athens no more. Depending on the day and month of your visit we will arrange for your dining experience to be offered to you at the most appropriate taverna among the few we have selected for you. You will be served a typical Greek meal with appetizers, a salad and a main course, as well as dessert.

Full guidance by a professional officially licensed, fluent in English tour guide and private transportation by a luxurious fully air-conditioned private vehicle and a professional non smoking driver, the dining experience ,as well as taxes are included.

Gratuities and the entrance tickets to the monuments, as well as snacks and drinks either than the dining experience , are not included.

Tweet
More in this category: « Ancient Corinth and the Canal

Highlights
Guided tour of the Acropolis Hill and the Parthenon
Guided tour of the New Acropolis Museum
Guided city bus tour of Athens
Lunch at a local taverna
Free time at Plaka and Monastiraki
Duration
8 hours
Entrance Fees
20 euro p.p.: Ticket for the Acropolis Hill Children up to 18 y.o. enter for free
10 euro p.p.: Ticket for the New Acropolis Museum
Good to know
Travel time: 1 hour 45 mins
Walking distance: 2300 m.
Total number of steps: 130
Restrooms available: Yes
Shopping available: No
Air conditioned: Inside the vehicle
Photo restrictions: No restrictions
Credit cards accepted: Yes
No group will be larger than 12 pax.
During summer, Greece can be very hot. It is advised to have with you sunscreen, glasses, hats and dress lightly in order for you to enjoy more the time you will spend outdoors.
Strenuous activity: Requires active participation, walking long distances over uneven and steep terrain or on steps.