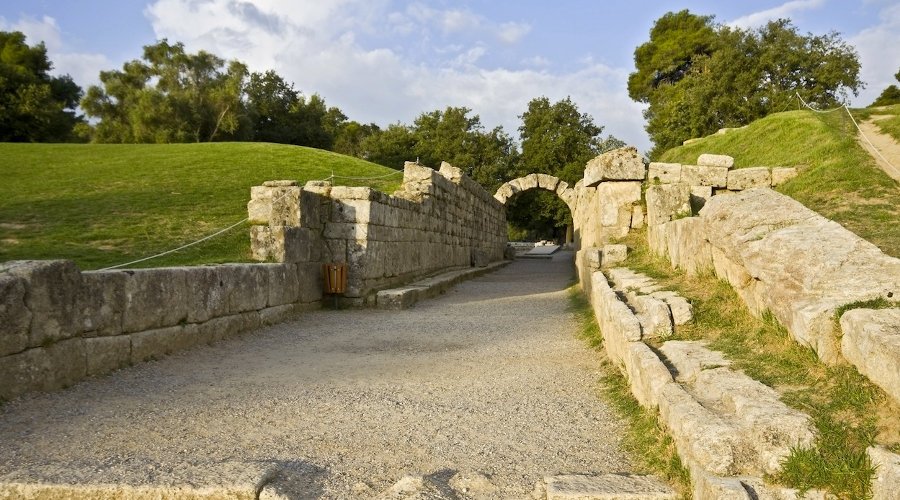 For those of you that can't leave Athens without visiting the birthplace of the Olympic Games, this is a good chance to experience as much as possible of this ancient sacred land, being prepared for a long but fascinating day.

Departing Athens, you will drive towards the west of it and you will continue your journey through the highway. One of the most impressive parts of the scenery will be the unique and historical location, between mount Aegaleo and the island of Salamis, where the naval battle of Salamis was fought, in 480 BC, with Xerxes viewing everything from the top of the mountain and the Persians receiving a devastating loss from the Athenians.

Continuing the drive, you will pass the valley of Megara many centuries old, filled with groves of pistachio and olive trees with the view of the impressive mountains of the Peloponnese on the one side in the background.

You will have a short stop by the Corinth canal, which separates the mainland from the peninsula of the Peloponnese and connects the Ionian Sea with the Aegean Sea. There you will have the chance to walk over the bridge and enjoy breathtaking views, taking as many photographs as you would like to.

Then through the highway and the Peloponnesian mountains you will continue your drive and you will arrive in the beautiful plane of Olympia, approximately 4 hours after your departure from Athens.

In Olympia you will meet your officially licensed tour guide and you will board a 2.5 hours private guided tour of the archaeological site and museum, where you will see among other things, the ancient gymnasiums, the workshop of Phedias, the temples of Zeus and Hera, the altar where the Olympic Torch is always being lit for the Modern Olympics, the stadium, the pediments of the temple of Zeus, the statues of Nike of Paeonius and Hermes of Praxiteles, as well as the legendary helmet of General Miltiades from the battle of Marathon in 490 BC.

After this fascinating experience of exploring the ancient sacred grounds and experiencing the serene environment of the site that inspired the sacred truce among the ancients Greeks, for a month prior to the Olympics, each time, you will be able to have a short stop for lunch or a snack, either in the modern town of Olympia. Upon request, you will also be able to enjoy a unique, home meal, in the private veranda, of a hill top cabin, but in this case your tour's duration will need to be extended at least 1 hour.

Your journey back to Athens can be either by following the same route, or a different one. You can either drive through the mountains and traditional villages like Lagadia and Levidi, or via Patras and mostly parallel to the sea, enjoying the view of it as well as seeing one of the largest suspension bridges in the world.

Highlights
Guided tour of the Olympia archaeological site
Guided tour of the Olympia archaeological museum
Short stop at the Corinth Canal
Duration
11 hours
Entrance Fees
12 euro p.p.: Combined ticket for the archaeological site and museum in Olympia
Children up to 18 y.o. enter for free
Good to know
Travel time: 7.5 hours
Walking distance: 2900 m.
Total number of steps: 20
Restrooms available: Yes
Shopping available: Yes
Air conditioned: Inside the vehicle and the museums
Photo restrictions: No flash photography and posing inside the museums
Credit cards accepted: Yes
All private tours can be customized further according to your needs and preferences.
We always try, when possible, to start the visit from the least crowded areas depending on where the rest of the crowds will start from.
During summer, Greece can be very hot. It is advised to have with you sunscreen, glasses, hats and dress lightly in order for you to enjoy more the time you will spend outdoors.
Moderate activity: Requires intermittent effort throughout, including walking medium distances over uneven surfaces and/or steps.