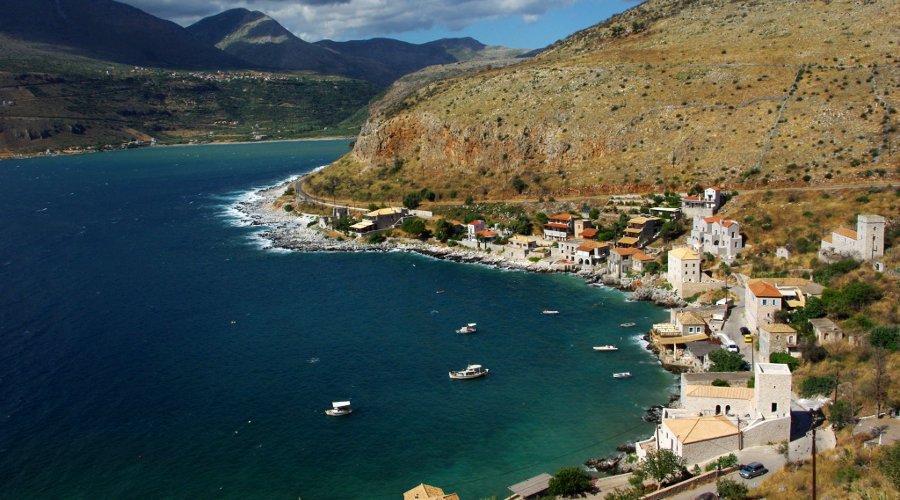 Southwest of Gythio, this semi-mountainous village is the center of Itilos in Laconia. Dryalia, Lagokilio, Limenio and Omales also belong to Areopolis. Placed on the southeast side of Laconia, on the small peninsula that separate the coves of Limenio and Diros,  awashed by the Messenean Gulf, on the slopes of the last hills of Taygetus.
In the past it was called Tsirova and was recognised as a municipality in 1912. Areopoli is one of Mani’s oldest vil- lages, capital and historic center of Itilos and home of the famous family of Mavromichalis. Historical buildings are preserved, among them the Church of Taxiarhes, in which the family of Mavromichalis made the declaration of revo-lution against the Empire of Ottomans in the 17th of March in 1821. As a monument of the sacrity of the revolution, a rock with a hole in the center is saved, where Petrobeis Mavromichalis fastened up the flag of the revolution. Areopoli has a long and important history. In 1826, the town was used by the fighters as strategic base and a center where they gathered the necessary for their battles. You can visit a Church Museum which has heirlooms from those times.

Areopoli means “the city of Aris”the god of war according to mythology and it was named by Othon, the first king of modern Greece, showing this way his appreciation to the Mavromichalis family. Nevertheless, when the Bavarians were planning to destroy the castles of the area (which were for ages bases for fighters and bunkers), the people stood up in what history named the insurgency of Mani. The insurgency was finally a success and the castles remained un- touched. During the 19th century the population in Areopoli turned themselves to education and industry, lots of them immigrated, mainly in America, due to the infertility of the ground.

A landscape carved on the rocks by the wind. Hard and rugged yet charming. The colours of the sea to the west of Mt. Taigetos to the north, of Mt. Sagias (Lower Taygetos) to the south. Only to the east does the road afford a glimpse of green.

Here, at the top of Mesa Mani, the commencement of the Struggle for Greek Independence was proclaimed on March 17. 1821.

At Areopolis, the Maniot town that took its name from the god of warfare, Aris (Mars). The protected monuments are the churches of Agios Ioannis Prodromos, Agios Athanasios with wall paintings and Panagia Tsipiotissa. Also protected are the four-store of Mavromichalis Tower and is surrounded by a large building complex and a tall enclosure, rendering it a real fortress and the Pikoulakis Towerha who has three stores, with a strong, two-storey tower-house. It will also become a museum after its restoration.

The imposing castle of Kelefa is located north of Aeropoli and south of Itilo. It was built around 1670 by the Turks, with the assistance of Liberakis Gerakaris and in 1685 it was seized by the Venetians and the Maniates.In our days we can see the remains of the massive exterior walls, two towers (out of four that existed originally), ruined buildings in the interior and one canon, out of the 58 that were defending the castle, in the times of glory.

Itilo is one of the most beautiful traditional villages of Mani. Located about 11 km from Areopoli it is built amphitheatrically on the west side of the canyon that separates the interior Mani from the exterior or Messinian Mani. Standing opposite Itilo are the ruins of the Kelefa Castle while lower below are the twin bays of Limeni and Tsipa (which was renamed to Neo Itilo in 1903). Itilo is one of the most ancient towns and, as mentioned in Homer's works, it belonged to the Kingdom of Menelaos . In the area were discovered archaeological findings from the Mycenaean, Classical and Roman era. The town participated in the Trojan war and was one of the most important members of the "League of the Free Laconians" and the "Lacedaemonian League". Between 1672 and 1674 many residents of Itilo emigrated; members of Giatrianos family to Toscana and members of the Komninos- Stephanopoulos family to Genoa , while members from both families also settled in Corsica .In the village square one can see the relief plaque commemorating the town twinning between Cargeze in Corsica and Itilo (1990). Also in the square is standing the statue of the modest hero of the 1821 revolution Elias Tsalafatinos. One kilometre to the south of the town is located the Thekoulou or Dekoulou Monastery, with its preserved church and marvellous paintings of holy images.

The village of Tsipa, which was renamed to Neo (New) Itilo in 1930, lies 6 km out of Areopoli. Neo Itilo has been developed on the beautiful sandy beach of the bay and provides an ideal location for swimming, with its nice beach extending below the mountain slope where the remnants of the Kelefa Castle are still standing.

A few kilometres outside Areopoli, Mani has reserved a pleasant surprise for the summer visitor. It is a tiny harbour village– a real painting like picture – of a few small stone houses with colourful windows and red-tiled roofs.

The houses are scattered among the rocks, which are wetted by the turquoise waters of the bay bearing the same name. On our way down the mountain slope, suddenly appears the small village, nested in the small cove, with its old stone houses hanging from the rocky mountainside with the scattered tall cypress trees. The deep blue sea next to the village combines to create a unique picturesque image. The turquoise waters are fresh for the first few meters from the beach, due to the underground flow of fresh water, coming out of the rocks. Limeni, the seaport of Itilo, was the base and the port of Mavromichalis family, which played an important role in the liberation war (Revolution) of 1821. We can see in Itilo, the restored, four-story Mavromichalis tower house with its arched openings, which is going to be used as a Museum.