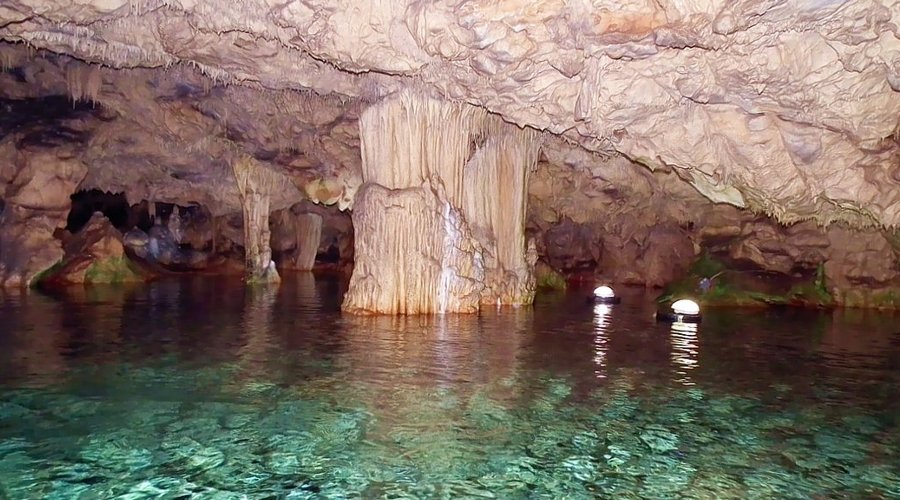 Diros Cave is considered to be the first of the three most beautiful and impressive lake caves in the world (along with this of Padirac in South France and the Jeita Grotto in the capital of Lebanon, Beirut) because of its multicolored and wonderful decoration. It is situated in the south of Areopoli, in Lakonia. The bay of Diros with its white pebbles and the crystal waters lies below the entrance of the cave.

It is consisted by three separate caves: Vlyhada (or Glyphada) which is the only accessible one, Alepotrypa and Katafygi. There is also the Corals' Cave in the vicinity of Diros, where there are stalactites colored ochre, looking like huge corals. These of Alepotrypa and Katafygi settlements are not still accessible, as the explorations inside them are not yet accomplished. The first one at Alepotrypa was discovered in 1958. It is a long cave with large halls and labyrinthine corridors of total length 280 m. At the back of the larger hall there is a lake of clean, drinking water.

The excavating research in the cave started in 1970 by G. Papathanasopoulos and brought under the sun light findings, which prove the human use of the cave during the Neolithic Era (approximately until 3.000 BC). The findings are handy pottery, storage jars, stone and bone tools, loom weights, jewelry and others. Stone paved floors, circular fire places and storage ditches were also spotted. Finally it must be mentioned that plenty of human bone material was revealed mainly at the recesses of the cave but also scattered in it. The conclusion of those is that the cave was continually used as a residence, goods' storage, laboratory of domestic activities and grave place.

The third unit of Diros Cave, the Vlychada Cave, 3,5 km long, is the longest known in Greece. The first part of the cave was discovered by Peter Arapakis in 1898, but the systematic exploration began in 1949 by the couple of John and Ann Petrochelou. Its development started in 1958 and five years later it became accessible to the visitors, with only a ground part of 600m length. 1.600m of length had been explored and mapped until 1960, while the known length of the cave is over 14 km. Its real length has not been verified yet, as the exploration is still conducted over and below the water surface, by cave divers. In 1979 new parts were discovered and ground - laky corridors were mapped. Although, more than 10.000 m2 of archways, chambers and halls have been explored till now, only 3.100 m2 are accessible, from which 300 m2 on ground and the rest on water.

There were residences here during the Neolithic period, according to its findings. Human skeletons and craniums, animal skeletons, tools, marble figurines, pottery and a stone axe were found. It is believed that 45 centuries ago, unlucky residents were enclosed in the cave after a strong earthquake. All findings are exhibited in the Neolithic Museum of Diros.

The flow of the subterranean Glyfada River flows on the bottom of the cave, forming it through this way. This flow lets out at some points, being transformed into lakes. There are too many archways and chambers. The river bed is consisted by limestone which has been modified to marble and develops in two central parallel corridors retaining many bifurcations. There have been made several works for making the cave accessible to visitors. An artificial entrance of 100 m width has been constructed to the left of the natural one, and 1.000m further along the central corridors an artificial tunnel connected them to each other, so the touristic tour traces circular. On the cross point of the water and the ground parts of the cave, bones of a pre-bull and a pre-hippopotamus were found on the bottom. The biggest part of the cave is covered by sea water, so the 45 min of duration tour is conducted on small boats of 8-10 persons.

The main characteristic of the cave is its big and multicoloured stalactites, which have been connected to its bottom, forming palatial columns and also stalactites that look like representing figures of objects, animals or people. The cave began to be formed millions hundreds years ago. The stalactites and the stalagmites lying under the water surface were formed when the sea surface was much lower than today. It is important that stalactites have been found at 71m deep. The maximum water depth is 15,5m and the water temperature is 12°, its hardness on the surface is 90°, in the middle deep 180° and at the bottom 290°. The air temperature in the cave ranges from 16°- 20° in winter and summer.

Brilliant white, pink or red stalactites and stalagmites, sometimes being fuzzy, grey or white columns, formed through the natural rule drop by drop of carbonate calcium, compose the stunning decoration of the cave. The lighted forms are magic and retain names given by the locals, so that the visitors can be helped to comprehend everything. Many of the names come from the Greek mythology, others indicate the ancient Greek lyric tradition which is still preserved by today's Greeks and other names are ought to the historic experiences of the locals. You can enjoy the First Hall with the cloak of Poseidon, the Dead City, the Cross Road with the Nereids and the white Baby Bear, the Lake of Ocean Nymphs with the Stone Forest and the wonderful stalagmite of the Small Haycock.

Subsequently you can see bibelots of unique beauty like the Episcopal Throne, the Foot of Poseidon, the Stone Lily and a Church entrance with a chandelier and the ambo, the Hall of Diros with the ancient Greek chlamys, the Pink and White Departments with the Harp, the Royal Balcony, the Gate and the Hanging Fox and finally the Chapel. Then, an artificial pass leads to the Sea of the Shipwrecks with a sunk ship, the hall of the Golden Rain, the Chocolate Hall, the Red Hall, while in the middle of a canal you can face the Tower of Pisa and at the opposite of it the Crib. Amazed you will be led to the Hall of the Great Ocean with 160m of length and 30m of height with the Large Disk, the innumerable fringes and the Dream Lake, where the river flows into the sea, while the Gothic Hall appears from the next part and the laky route is accomplished. You can step on a path of the next ground part and among the decoration you can observe the Memorial of the Anonymous Seaman, the Palace of Pluto, the Stone Forest and the Nenuphars.