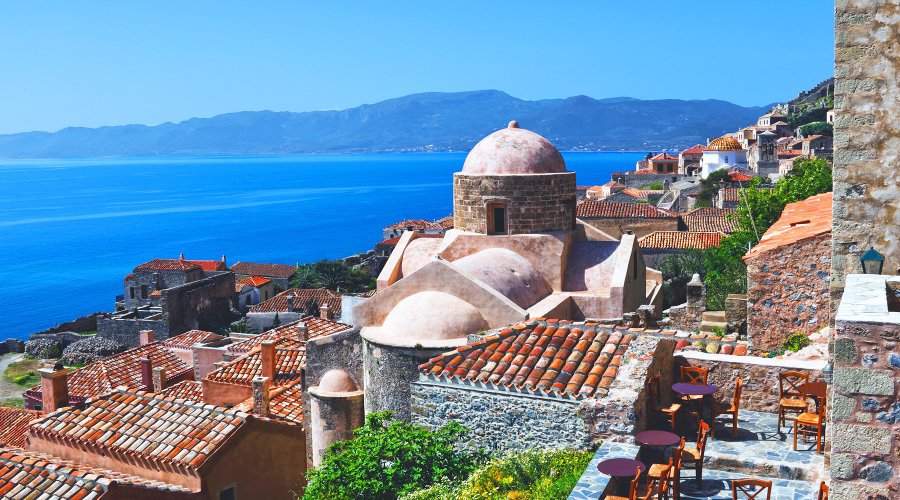 Monemvasia is located in the southeastern Peloponnese in the prefecture of Laconia, 400 meters from land having been separated from the mainland by an earthquake in 375 A.D. Its name derives from two Greek words, mone and emvassi, meaning "single entrance". It was called Malmsey by old English writers, Napoli de Malvasia by the Venetians and Malvoisie by the French.

It was founded by the Byzantines in the sixth century and shortly after it became an important port. It remained in Byzantine possession for almost seven hundred years until it was captured by the Franks in 1249 after a three year siege. However, it returned to Byzantine hands ten years later and became the chief port of the Despotate of Mystra.

When the rest of the region was captured by the Turks in 1460, Monemvasia remained unharmed by placing itself under the control of the papacy (1460-1464) and later under the Venetians (1464-1540). In 1540 the Turks gained control of Monemvasia after the Venetians abandoned their garrison. Although Monemvasia experienced decline under Turkish control, it underwent a revival when it returned to Venetian hands between 1690 and 1715.

In the War of Independence, Monemvasia was the first of the major Turkish fortresses to fall after a four month siege in July 1821. On August 1st 1821, overcome by misery and illness the Turks agreed to surrender to Demetrios Ypsilantis.

During World War II the New Zealand 6 Brigade numbering several thousand men was successfully evacuated on April 28th 1941 mainly from the causeway and the two piers. Soon after the Germans entered Monemvasia, which was not used as a defensive position but rather as a place for wounded soldiers to recover.

Today a causeway links the mainland town of Yefira/New Monemvasia to Monemvasia or Kastro (castle). The Kastro is divided into a lower and an upper town. Many ruins of the original 800 houses and only four out of the original forty churches can be found in the lower town. Among them is the Church of the Elkomenos Christ (Christ Dragged), which is named after a famous icon of Christ given in 1700 to the church by Andreas Likinios, philosopher and chief physician to the ruler of Moldavia, Dimitirs Kandimir. The oldest church is St. Paul’s, which was built in 956, and today houses the museum. Further on, towards the eastern edge of the lower town and closer to the sea is the whitewashed Our Lady of Hrisafittisa, which was built in the sixteenth century.

High above, castle walls protect the upper town on the summit. There one can see the remains of Byzantine houses and public buildings and a vast cistern that ensured a water supply at times of siege. A fortified zigzag path from the upper town leads to the Fortress of Goulas on the summit overlooking the town. It is entered by a tunnel that still retains its ironbound gates. Among the ruins of houses and cisterns of the acropolis of the upper town stands St. Sophia, a Byzantine church founded by Andronikos II Paleologos on a plan similar to that of Daphni in Athens.