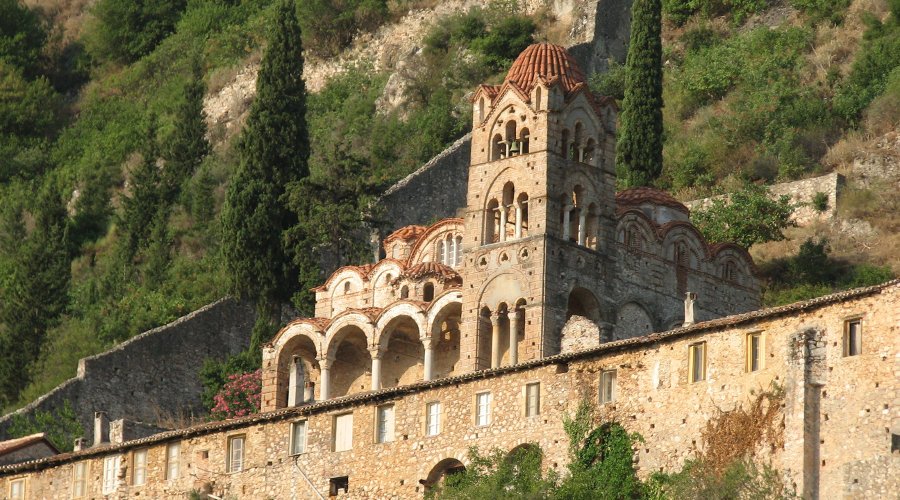 Mystras, the 'Wonder of the Morea', was built as an amphitheatre around the fortress erected in 1249 by William of Villehardouin. Reconquered by the Byzantines, then occupied by the Turks and the Venetians, the city was abandoned in 1832, leaving only the breathtaking medieval ruins, standing in a beautiful landscape. The complex of the ruins of Mystras offers the image of a city with a brilliant destiny that was deserted by men and threatened by the return of encroaching vegetation, which is splitting the walls and covering the slopes, thus destroying here and there fragile traces of history.

Mystras came into existence in 1248-49 when the Frankish lord, William II of Villehardouin, Prince of Achaia, resolved to build a great castle on the top of the 620 m hill overlooking Sparta. The castle would be able to withstand attacks by the Byzantines, and also contain the Esclavons, the Slavic tribes of the Melinges and the Lezerites who inhabited the Taygete. Although a few inhabitants continued to live in the ruins, the city was not abandoned until after 1832, when King Otto I founded the new city of Sparta. For almost six centuries, Mystras lived a troubled existence. However, several times and under different regimes it assumed a leading political and cultural role. The vicissitudes of history did not spare the construction built by William II of Villehardouin. The castle had barely been completed when the Prince of Achaia, defeated by Michael VIII Palaeologus at the battle of Pelagonia and made prisoner, was forced to cede as ransom to the basileus the three strongholds of Monemvasia, Mania and Mystras (1261-62). When the favour of victory momentarily shined upon him once again, in 1265, Villehardouin found that the inhabitants of Sparta had deserted that vulnerable city and taken refuge around the castle of Mystras. From 1262 to 1348, because of many wars in which it was often the prize, Mystras was the seat of the Byzantine military governor, first named for a year then, after 1308, for life. The bishopric of Sparta was transferred to the new city, and the Metropolis, dedicated to St Demetrios, was built in 1264, and reconstructed after 1310. Convents, such as those of the Theodore Saints (prior to 196) and those of Brontochion (c. 1310) were built and richly decorated.

From 1348 to 1460 Mystras became the capital of the Despotate of Morea. The despotate was the expression of the relative desire for decentralization of the Cantacuzenes (1348-84) and the Paleologi (1384-1460), who, according to a system modelled on feudalism, conferred power to family, in most cases to sons or brothers. During this period - the zenith of Mystras, when the Peribleptos and the Pantanassa were built around 1350 and 1428 respectively - the cosmopolitan city was a major piece on the political chessboard on the Mediterranean. Most of the despots married Frankish princesses; some made necessary alliances with the Turks, others with the Venetians. In 1402 Theodore I Paleologus sold Mystras to the Knights of Rhodes; only the hostile reaction of the population forced him to cancel the transaction. After paying a tribute to Murad II at the time of his victorious expedition in 1446, Mystras fell to Mohammed II on 30 May 1460. The event was seen in the West and in the East as being almost equal in importance to the fall of Constantinople in 1453.

The beauty of the churches of Mystras, which during the Paleologus Renaissance had been covered with dramatic frescoes, the renown of the libraries of Mystras and the glory of its writers (including Georges Gemiste Plethon and Jean Bessarion who brought neo-Platonic humanism to Italy) gave substance thereafter for the legend of the 'Wonder of Morea.' Dominated by the Turks, conquered briefly by the Venetians In 1669, then occupied for a longer period from 1687 to 1715, and recaptured in 1715 by the Ottoman Empire, Mystras never recovered its past grandeur, although it still numbered some 40,000 inhabitants. The silk industry was the manufacturing and trading city's only resource. Mystras was burned by the Albanians during the Magna Revolt in 1770 and was in a state of decadence when it was definitively abandoned.