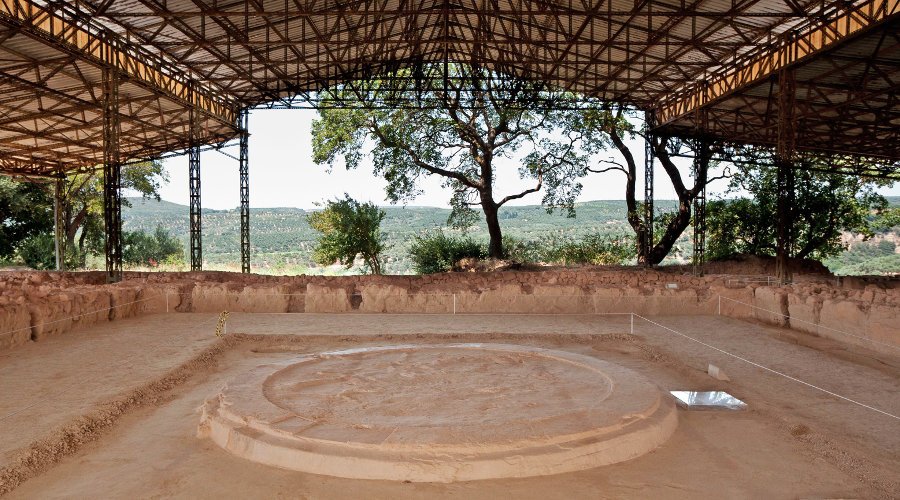 The agricultural town of Hora, located 50 km from Kalamata, is known to all visitors as the archaeological area where the Upper Egklianou palaces of King Nestor were discovered (many compare them with Ancient Mycenae and Tiryns). Close by is the tholos tomb attributed to Nestor and his heir Thrasymidi. Findings from the palace and surrounding region that came to light by the excavations (approximately 4000 years of archaeological finds) can be found in the Archaeological Museum of Hora.

On the Upper Egklianou hill, 4 kilometres south of Hora, the palace was found that is said to be the Palace of Nestor. The excavations started in 1939, and were completed after the Second World War, brought to light earlier ruins from the Palace. The city and the Palace were destroyed in 1200 B.C., probably during the invasion of the Dorians.

The Palace of Nestor just14 km from Pylos, is among the most important monuments of Mycenaean Greece, because it is the only Mycenaean Palace which is in such good condition. The palaces were built in the 13th century B.C. by King Nestor (son of Neleus) who took part in the Trojan War with ninety ships. Ancient Pylos was the second biggest city of the Mycenaean world, after Mycenae, and King Nestor is portrayed as one of the most respected characters in the Homeric epics. The surrounding landscape was calm and the the Palace was not fortified, unlike the other Mycenaean settlements. The palace was almost completely destroyed in the early twelfth century, by fire and never reconstructed. The fire had an extremely positive result; it baked many ceramic tablets thus saving approximately 1200 texts with rare information on the economy, society, worship etc. of the Mycenaean times.

Heinrich Schliemann had made inquiries in the area in 1888, but didnt manage to find the palace of Nestor. In 1912 and 1926 the archaeologist Kountouriotis discovered two Tholos tombs that Carl Blegen felt were royalist. In 1939 Kountouriotis identified the location of the prehistoric royal Palace and the excavation was continued and completed by the American archaeologist Carl Blegen. For 10 days they made excavations in 8 locations and found Mycenaean vases. On the 4th of April they had already found parts of murals, tablets with Linear B  (these tablets, which are reminiscent of palm leaves, 1250 in total, were decoded in 1952 by the architect Michael Ventris and the classical scholar John Chadwick, giving us practical information on life in prehistoric Pylos), and one meter thick walls This stage of the excavations continued until 10th May, revealing much of the Palace.

By studying the texts of more than 1100 tablets of Linear B, that were found in the palace complex, the decryption of the Linear B script by Michael Ventris gave abundant evidence of the strong industrial and commercial activity of the area with the Palace at its centre.

The excavations were stopped at the start of the Second World War until 1952. The palace complex consists of four main buildings, which have dozens of partitions. After the discovery of the throne room, Blegen called the site the Palace of Nestor. Gradually the ruins of a wealthy 2 floored edifice came to light and other two auxiliary buildings, spread half way over the plateau of Egkliano. Around the Palace Tholos graves have been excavated with remarkable objects, the closest being found at a distance of 80 metres from the Central Palace.

The Palace is a complex of buildings with a total of 105 ground floor apartments and other public spaces. It consists of four main buildings (western, central, northeast & wine warehouse), as well as some smaller buildings. The most important part is a large rectangular Crown Room" with a circular hearth, also the bathroom with its clay bathtub and warehouses with numerous storage vessels.