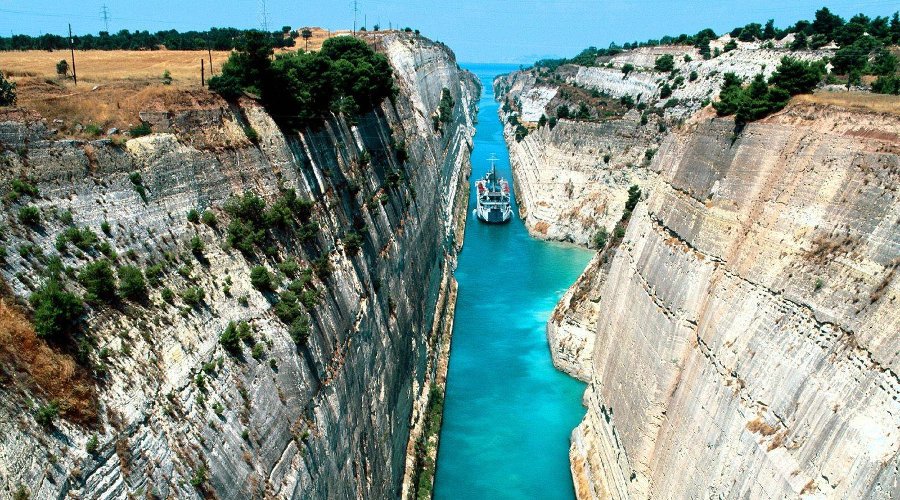 The famous Corinth Canal, which separates the Peloponnese from mainland Greece, connects the Gulf of Corinth with the Saronic Gulf. The Corinth Canal, though only completed in the late 19th century, was an idea and dream that’s dates back over 2000 thousand years.

The strip of land that connects the Peloponnese and mainland Greece is called the “Isthmus”. At it’s narrowest point, it is only 4 miles wide, and in ancient times, one could see from one side to the other.

Before the Corinth Canal was constructed, ships had to travel all around the Peloponnese, which added approximately 185 nautical miles, and several days more travel to their journey time.

The Ancient Greeks devised a solution to the problem of the extra length of the ships’ journey when the “Diolkos” was constructed. This was a stoned path, paved with limestone, which ran along from Schinous on the Saronic Gulf to Poseidonia on the Corinth Gulf. The name “Diolkos” means a “movable platform”.

The tyrant of Corinth, Periander, was the first who envisioned the Corinth Canal in 602BC, but the technical capabilities in ancient times made his idea impossible to carry out. Instead, he developed the “Diolkos”, which more than served its’ purpose.

Along the “Diolkos” ran the “olkos”, which was a wheeled vehicle onto which ships were actually lifted onto, and taken over land from one side to the other.

Not all ships could use the “olkos” due to their size, but in many cases, the cargo of ships was taken off at one side, and transported to the other, where a second ship would be waiting to load on the cargo. Today, there are still sections of the “diolkos” that one can still see.

There were many others who intended to start the construction of the Corinth Canal, but for a number of varied reasons, the project never took off. Demetrius Poliorkitis, King of Macedon was one who tried in 300 BC, but with no positive results.

Amongst reasons stopping him was the belief that Poseidon, God of the Sea, opposed the joining of the Aegean and the Adriatic. This was also a fear that stopped Julius Caeser and Emperors Caligula and Hadrian from starting construction of the canal.

The first serious attempt at the canals construction was by Emperor Nero, who in 67AD, announced to spectators at the Isthmian Games that he was going to dig the canal that would "connect the two seas".

Nero in fact dug the first piece of land out himself, using a golden pick, and carried this first basket of earth and turf on his own back. However, even though Nero had approximately 6000 slaves who would work on the canal, again, the plan never materialized, for several reasons, including financial ones.

The idea for the canal was left unfinished, until it was revived again during the late 1800’s. After several false starts, the Corinth Canal was finally completed, and put in use, on October 28th 1893.

The work on the canal was carried out by a combination of French and Greek workmen. The Corinth Canal was actually based on the “Panama ans Suez Canals”, and has often been referred to as the “step-child” of these canals.

The Corinth Canal is still in use today, though many newer and larger ships are too large to pass through any more. However, the canal is still used by many smaller ships, and there are also cruises organized where you can travel on a boat along the canal.