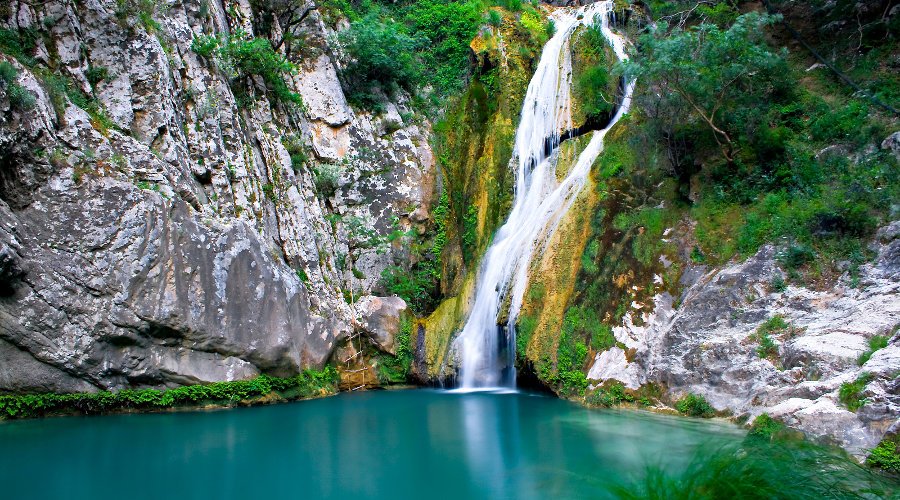 Crossing the canyon of Neda, one has a unique chance to get in touch with the mysteries of the Greek mythology and the treasures of nature. The river springs from the foot of Mount Lycaion, in Petra of Messinia, a quite peaceful landscape. As it flows, it gets rapid and foamy, because many rocks stand in its way, narrowing the river-bed.

Perhaps the most well-known myth of ancient Greece is the one about god Cronus, who used to swallow his children, fearing they would dethrone him, When his wife Rhea gave birth to her last child, Zeus on Mount Lycaion, according to the natives of Arcadia, she decided to save him, so she entrusted him to the care of nymphs Neda, Thissoa and Agno, and asked them to raise the child. According to the descriptions of ancient traveler Pausanias, after the childbirth the nymphs cleaned the puerperal and threw the impure water with the placenta to Lymakas, a river in Figalia which empties into Neda. The ancient Greek word for this dirty water is “lymata”: that's how Pausanias explains the name of the river.

He also offers us valuable information about Neda. He lets us know that the river was navigable for small vessels; various signs of anchorages have been found and that nearby, on Mount Elaion, there was a sacred cave. It's in this cave that goddess Demeter, the protectress of agriculture, took refuge in and hid for a long time, dressed in black, mourning because her daughter Persephone had been kidnapped. The Olympian Gods moved heaven and earth to find her, because the soil was no longer fertile and people were dying of hunger like flies, God Pan, who had gone hunting in the region, ran across Demeter and said it to Zeus. The king of Olympus sent the Fates to soothe her anger. They managed to convince Demeter to come out to light again. Unfortunately, archeologists have not located the cave yet.

Pausanias also informed us about a devout custom according to which the youngsters of the region used to cut their long hair short and throw it into Neda, in order to thank the deity of the water for their happy transition from childhood to adolescence.

By word of mouth, nymph Neda changed into river and her long braids became wonderful waterfalls, that have decorated the canyon ever since. The descent towards the canyon starts from the village Figalia which used to bear the name of Pavlitsa, where an important archeological area is located. Hikers would be interested to know that a path of medium difficulty {M2} starts right from the ancient spring of Figalia. The traveler gets for the first time in touch with the singularity of Neda when he meets the waterfall "Asproneri" (which means "White Water"), which falls from a height of 60m. and continues its course towards the river. The waterfall can be approached by another road, which crosses the village.

The owners of vehicles could follow the track which begins from the archeological area of Figalia, and after an impressive course ends in a wooded little valley, right to the point where the single-arch bridge of Jouloucha links two neighboring prefectures: Messinia and Elia. The most exciting course starts from there. The track hikers are protected from falling down the precipice by wooden handrails leads, through the dense foliage, to the waterfalls and the well-known Stomio, the cave which is traversed by Neda.

First surprise the little cascade. Near it, the Greek nature reveals one of its most impressive and well-kept secrets. The huge, white, foamy waterfall flows down along the mountainside into a cavity shaded by huge plane-trees, forming a lake in dazzling colors, which invites us to dive into its cool water.

A little higher up, a small country church made of stone hangs literally from the reddish rocks. It is consecrated to Virgin Mary. According to the legend, there was a miraculous icon of Hers in a small cave a little further from the church nobody knows how it was found there.

After a few meters on the same path, the canyon of Neda takes its legendary dimensions. The course ends in the flat upper part of cave Stomio, which is totally dark, full of bats and overflown by the water of Neda. For the few brave ones who dare cross it, getting out of it to light is the most impressive part of the course. From the bridge of Jouloucha the traveler can start crossing the canyon through water. If he is willing to walk between the huge, shiny stones and to swim wherever the water gets deeper, then he will undoubtedly experience an unforgettable feeling. To cross the river-bed of Neda, one needs a bathing suit and stout, water-resistant shoes.