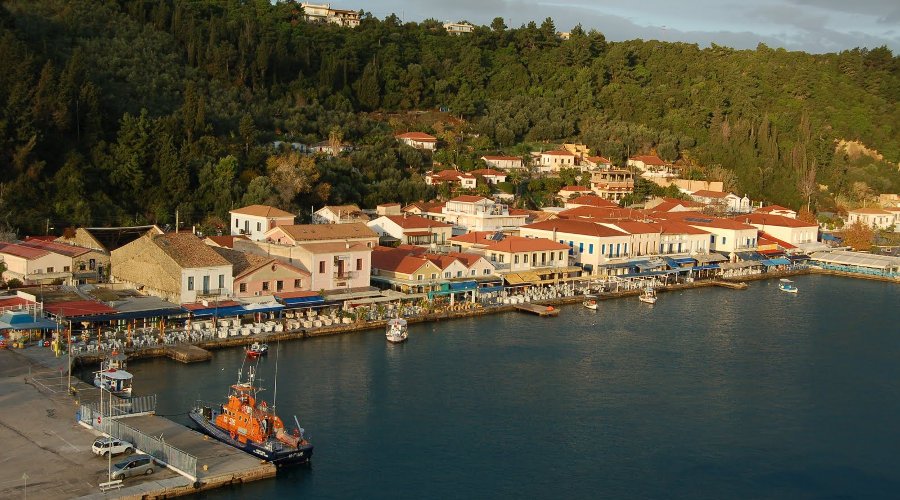 Katakolon is a seaside town in the municipality of Pyrgos in western Elis, Greece. It is situated on a headland overlooking the Ionian Sea and separating the Gulf of Kyparissia from the rest of the Ionian. It is 11 km west of downtown Pyrgos and 3 km south of Korakochori. The small village Agios Andreas lies northwest of Katakolo. A railway connects Katakolo with Pyrgos and Olympia.

The port of Katakolo is a popular stop for cruise ships, offering an opportunity for passengers to visit the site of Ancient Olympia. There is a Museum of Ancient Greek Technology in Katakolo. Low hills with forests surround Katakolo. The lighthouse of Katakolo was built in 1865.

Katakolo of ancient times was the second port of Elis after Kyllini. In the Homeric years it was a fort near the river Iardano, while during the Peloponnesian War (second half of the fifth century BC) was a starting point for Athenians to attack Ilia. The port was lost in the sea during the earthquake of the 6th century AD, while the islets Tigani and Crow are still visible from the bay of St Andreas. Shells of all time have been found, from the Neolithic to the Roman period.

The area had an important strategic role during the Byzantine and Medieval period, as on the remnants of the ancient citadel the Villehardouin built the magnificent Pontikokastro. After liberation from the Turkish yoke, Katakolo's centre relocated where it is today and took its current name. It was at that time one of the major ports of the country for export of grapes, the main export product of Greece. Today the port still plays an important role but mostly tourist.

According to tradition, in the modern history Katakolon was an exile in some way of people unacceptable by the societies of Zakynthos and Kefalonia. So they sent these people here using the phrase "άι κατά κώλου" with obvious derogatory tone. So gradually the area was named Katakolo.

Of great historical significance and worth mentioning is the railway line Pyrgos-Katakolon. The operation began in November 1882 and was the second line was constructed in the country after the line Athens-Piraeus. The cause was raisin exports, which rose sharply after the destruction of French culture by phylloxera. The line had a length of 12.5 km and built by engineer A. Straight. The project was funded by the General Credit Bank Act after the government of Koumoundourou. The crisis in the production of raisins in 1896 affected the rail creating problems. The "Railway Pyrgos-Katakolon" (SPK) but continued to operate and in 1951 went to the administration of SPAP (Railway Piraeus-Athens-Peloponnese). The line was closed in August 1998 to reboot after upgrading the network in 2007, now passengers can travel directly to Olympia, passing through Pyrgos.

One of the most fascinating pieces of Katakolon, that you should definitely visit is the castle known as Pontikokastro due to its shape. The castle, for the construction of which were used parts of the wall of the citadel of the ancient ruins of offices and buildings, was built during the Byzantine period from Villehardouin and rebuilt by the Franks in the 13th century, who called it "Bo Vouar" or "Bell Venter". Only parts of the fortifications still stand, as previously the castle saw many disasters, particularly during the Ottoman period. A single visit to the castle can justify fully the medieval name, as the view is unique. On one hand you have Kyparissiakos Bay and the other the Ionian Sea, with the eye travelling to Zakynthos and Kefalonnia! Also unique experience is the sunset that can captivate everyone!

Another important piece of Katakolon is the lighthouse. It is located in Cape Katakolon, in the southwest side. Constructed in 1865, with the height of the stone tower reaching 9 meters and a focal height of 45 meters. Its origin is French and its scope reaches 18 to 19 nautical miles. The interior is divided by four rooms that the lighthouse keepers used for bedrooms and in the tower is mounted the operation device. Nowadays with the technology improvements the lighthouse keepers and the old ways of operating have been replaced by new automatic systems.

If you are in Katakolon, you should definitely take a stroll on the village's mountain. The landscape will surely amaze you, the combination of colors, the blue sky and sea with the green of nature is something unique! Walk the trails and enjoy breathtaking views. You will surely be fascinated by the colors of the images that create the sunrise and sunset!

Tweet
More in this category: « Castle of Chlemoutsi Forest of Pholoe »