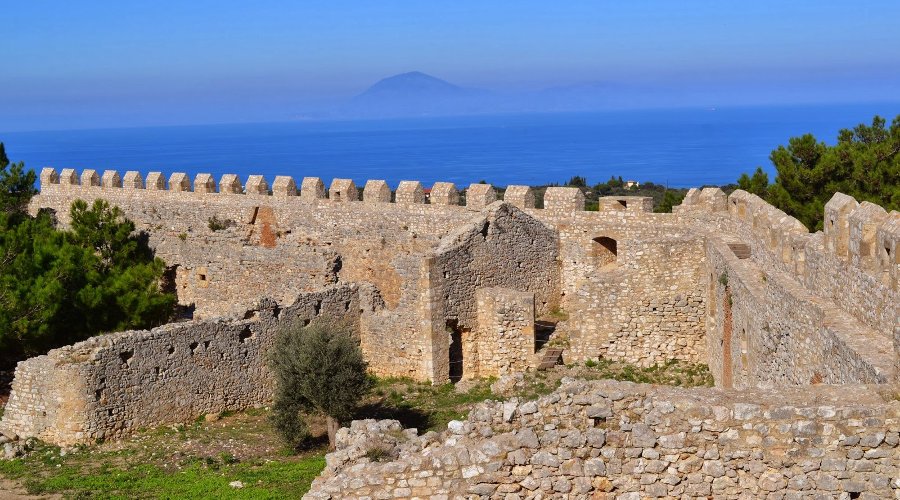 Chlemoutsi ranks among the most impressive and well-preserved castles. It stands on the site of Chelonata and dominates the Ionian Sea and the fertile plains of Elia. The heptagonal stone castle, one of the first built by the Franks in Peloponnese (after the Crusade of 1190) dates back to 1220-1223. Built 2 miles away from the sea, to the east, it impressed by its size. From the land it is visible from a five-days' distance and from the sea from a hundred miles away", writes the Turk traveler Ebliya Tselebi, who rambled in subjugated Greece during the period 1668-1671, recording his rich impressions.

In the beginning of the Frankish domination, two knights from Campany, J. de Champlitte and G. I de Villeardouin, were appointed princes of Achaia by pope Innocentius III. Therefore, they carried with them the western way of life, which revolved round the castles, symbols of power and, at the same time, means of defense.

Their successor G. II de Villeardouin chose a strategic site to build the castle on and was so determined to finish his work, that he did not hesitate to clash with the Catholic clergy of the Principality of Achaia, who did not offer any military services, because they wished to contribute more substantially to this significant undertaking.

The clergy complained to pope Honorius III, who excommunicated De Villeardouin II. But the prince went on constructing the castle undeterred. When the work was completed, he convinced the pope that the castle protected the vital interests of the Roman-Catholic church against the "schismatic" Greeks. Thus, the pope reversed the anathema. Andravida was the capital of the Principality. There was a port of great importance in the area, the port of Glarenza (Clarence) which is identified with the port of ancient Kyllini. The city of Glarenza had its own glorious castle, because in the Middle Ages It was considered so important, that her governors took the title of the "dukes of Clarence".

The castle of Chlemoutsi was at the height of its glory in the days of De Villeardouin II, and the noble French youths visited the palace to spend their holidays, enjoying the splendid view of the Ionian Sea.

Chlemoutsi became even more glorious when it was widely rumored that the room to the right of the colonnade was the mint where, by concession of the King of France Louis IX, the "tornesian" coins were minted. Those coins had on the one side the church of St Martin in the French city of Tours that's why they were called "tornesian" and circulated allover Morea during the period of the Frankish domination.

After the death of the third De Villeardouin, the castle came to his wife, Anna the Greek, daughter of Michael II Comnenus of Epirus. Since then, a turbulent period started. One of the two grand-daughters of the founder of the castle, Marguerite, baroness of Acoba, let her daughter marry one of the leaders of the Catalans, who had defeated the Franks in the battle of Kefissos, in 1311. Marguerite's son-in-law demanded Peloponnese in the name of his wife. The Franks counteracted his plans. They arrested Marguerite and imprisoned her in Chlemoutsi, where she died in 1315.

In 1427, Constantine Paleologus, the last Byzantine emperor, chose Chlemoutsi as the seat of the Domain of Morea, before beginning for the fatal journey to Constantinople and to history.

In 1465 the castle was seized by the Turks, in 1471 by the Venetians, then it fell into Turkish hands again, until in 1687 the Venetians occupied it again. During the period 1715-1821 it was seized by the Turks and in 1826 it suffered severe damages, when Ibrahim, during his pullout, bombarded it It still remains magnificent, though. Sauntering in its internal and external yard, in the ruins of the majestic rooms, where there is a fireplace in each of them, one travels in the past and gets the impression that he will hear the rustle of the silk dresses of princess Marguerite and her escort from inside the dark prison or that he will hear whispers and stories about fairies and princes.

Tweet
More in this category: « Temple of Epicurean Apollo Katakolon »