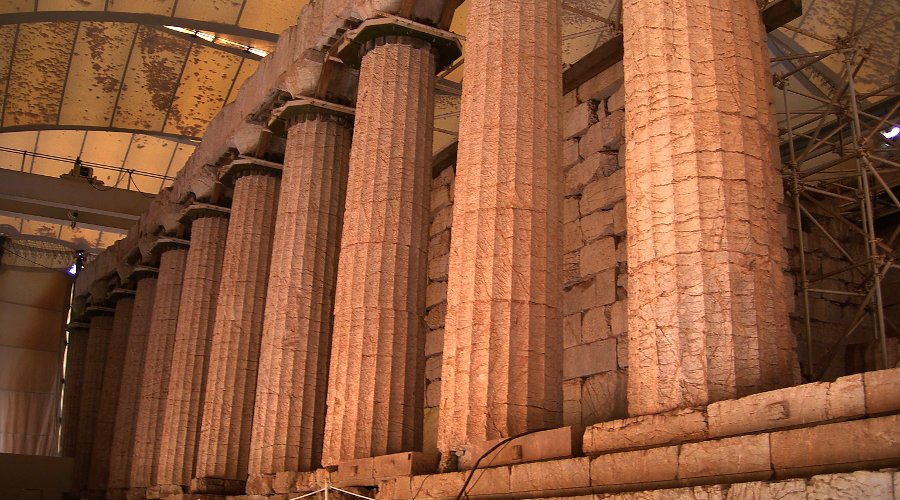 The magnificent temple of Apollo Epicurios built on the high ground at the height of 1130 m is one of the most significant and majestic monuments of the classical antiquity which is still in particularly good condition of preservation. Lit by the abundant sunlight of the rocky Arcadian landscape it makes the visitors tremble with joy at the sight of it. It was built in 420-400 BC by the Phigaleio citizens in the place of the anterior archaic temple.

The temple is a Doric pavilion made of the local asbestos stone, except for the capitals of the columns, the ceiling, the roofing tiles and the carved ornament that were made of marble. The north-southern orientation, which was not typical of ancient temples, was supposedly made so for religious reasons. It consists of a pronaos, enclosure and opisthodomos, and the notably elongated form (38.24 m in height and 14.48 m in width) is emphasized by the proportional enclosure columns, which are 6 on the narrow side and 15 on the long side instead of the usual number 6x13. The combination of archaic elements with innovating architectural ideas applied for the first time in the temple show an inspired and avant-garde architect who according to Pausanias was none other than Iktinos.

Especially interested is the inside of the temple for its originality, particularly the enclosure, where on the long sides there were thin walls with Ionic semi-columns and original capitals and semi-circular high bases. The two last inclined semi-­columns in the south of the enclosure, arising from the walls where the shrine used to be. Between them there was a free column with the oldest known Corinthian capital in the history of Greek architecture. In the eastern wall of the shrine enclosure there was a door, evidently, for sunlight admission so as to light the worshipped statue of the god placed there. The semi-columns of the shrine were supporting a low Ionic frieze which was made up of an epistyle sustaining the famous marble carved metope running round the four sides of the enclosure. The metope (with total length 31 m and height 0.63 m) consisting of 23 marble carved slabs, including eleven slabs depicting the fight with the Centaurs and twelve slabs representing the fight with the Amazons. Each slab represents a complete scene or a separate episode. The exceptional sculptures full of vivacity and vigor belong to anonymous artist. Many elements, however, are characteristic of Paeonios who sculptured the famous statue of Nice in Olympia.

The carved slabs were brought to light in 1812 as a result of systematic excavations carried out by the group of foreign scientists -enthusiasts fond of antiquities such as J. Foster, C.R. Cockerel and K.H. von Hallerstein. In 1914 the priceless metope was transferred to Zacynthos after dirt-cheap payment to the Turkish governor of the Peloponnese Veli Pasha, and in the end it was sent to the British Museum where it is now exhibited. The temple destruction began in the Roman period as a result of human interference, environmental factors and earthquakes that occurred in the area. The first serious attempt to restore the temple began in 1982-1908 by the Archeological Company, which has done a great work. Since the establishment of the Council for the maintenance of the Apollo Epicurios Temple by the Ministry of Culture, the members of the Council being various scientists, the study of the temple has been systematic and many complex problems have been solved. In order to preserve the temple, they realized as top priority measure the erection of a shelter protecting the temple from the environmental effects and from harmful weather conditions, anti-seismic scaffolding and lightning conductors.

As a result of the above-mentioned measures the monument is now separated from its natural environment, and the visitors can no more have the delightful aesthetic feeling they used to have before. However, the protection of the monument was so urgent and effective that it was worth making the sacrifice.

Lately, a long-term restoration program has been in progress. The objective is to solve fundamentally and definitely all the monument's problems so as to maintain it for the centuries to come.

Since 1986, the temple has been under the UNESCO protection as a monument which makes part of the World Cultural Heritage.

Tweet
More in this category: « Archaeological museum of Ilida Castle of Chlemoutsi »