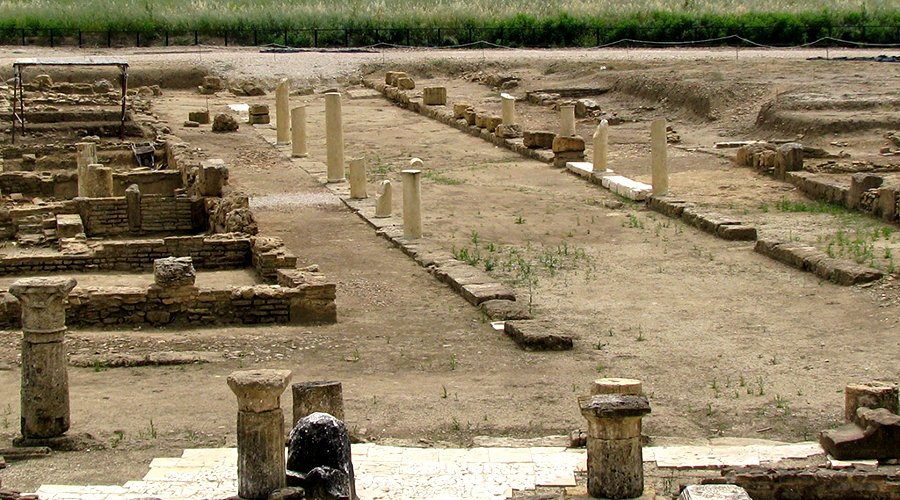 In the ancient times Ilis was the capital of Elia. It was not only the biggest city in Elia but also one of the most densely inhabited cities in Peloponnese. Although the ancient state of Ilis was a long way away from the big urban centers of Greece, it remained in the foreground for a long period of time as it had the curatorship of the pan-Hellenic sanctuary in Olympia and organized the Olympic games.

The ancient city emerged in the valley stretched out from the Pineios river in the south to the foot of the Agianni hill where the ancient Acropolis was located. It occupied the area between the present-day villages Palaiopolis or Ilis in SE, Augeio in SW and Kalivia in the west.

The city used to be the center of the Ilis valley, that was a fertile low land spread out to the seashore and was one of four peripheries of the state of Ilis being at the hight of its glory (6th - 4th century BC). The other three peripheries were Akroreia, Pisatida and Triphylia.

There were two roads leading from Ilis to Olympia: one road went through the mountains and the other through the valley on the side of letrinai. One more road led from Ilis to Kyllini where there was a haven on the shore of the Ionian Sea.

It is evident from the excavation data available today that the area had been inhabited as a small agricultural settlement from the first Hellenic period (about 2800 BC). In the Mycenaean period (1600-1100 B.C.) it was one of four towns in the area and the inhabitants were called Epeians as they were mentioned in the Homer epos

Oxylos is mentioned as the founder of Ilis, who came from Aitolia together with the Dorians (12 century BC) and is said to be the founder of the Olympic games, which later were revived by his descendant king lphitos

From 776 BC the year of the first Olympic games the Eleians had the curatorship of the Olympia Sanctuary, which, after numerous conflicts with the residents of Pisates, they held continually till the 4th century B.C, when the city was at the hight of its glory, with many citizens who lived peacefully in the fertile and privileged location. In the historical period the Eleians considered their capital as sacred and for that reason the city was not fortified. The Sacred Armistice institution contributed considerably to that as it was authoritative and inviolable for more than a millennium era of the Olympic games.

The preparation and the perfect realization of the games was the main duty of the city, while the inhabitants there were engaged chiefly in agriculture and livestock breeding. The finds that were brought to light as result of excavations and particularly the pottery and brazen articles show that there had been local workshops in Ilis, which developed a peculiar kind of art, and there had been a mint in the city from the 6th century BC

Women in ancient Ilis played an important role in the administration and public affairs of the city. It was the council of 16 wise women from Ilis which made peace between Pisa and Ilis and set up the Hereon institution pan Hellenic race for girls in honor of Hera, held every four years like the Olympic games for men but at a different time.

Out of the great number of buildings and sanctuaries mentioned by the ancient traveler Pausanias (2nd century AD), after the excavations held in the area, we can recognize today the Gymnasium which has not been excavated yet, the baths, the temple of Achilles, the "Mesimvria Colonnade", "Kerkyra Colonnade", Hellanodikaion and the fencing of some sanctuaries. At the northern end of the Agora, there is the ancient theatre built in the 4th century BC, and modified in the Hellenistic and Roman ages. The scene made of stone, the proscene and the parascene are the oldest in ancient Greece. The theatre was divided by six stone staircases into seven parts without seats where the spectators were seated on the inclined ground.

The Austrian Archeological Institute carried out the first systematic excavations in Ilis in the period 1911-1914. From 1960 till 1990, the Athens Archeological Company continued the excavations with intervals. For two years, the Group subordinate to the Ministry of Culture has carried on cleaning and excavations actively.

Part of the ancient city was brought to light in the course of excavations held by the Z Inspection of the Antiquities in Olympia from 1965 till 1970, when they made an entrenchment 2 km in length and 40-80 m in width, where Pineios dam conduit was laid forthevalley irrigation.

The numerous finds revealed by the excavations are indicative of continual habitation of the area from the prehistoric ages till the Roman epoch (1 century BC -3 century AD) when the villas and baths were built and the city stretched out even more in all directions and reached great prosperity. In the late Roman period and in the early Christian years (3rd - 5th century AD) Ilis was obviously in a state of decadence. Only a small part of the city was still inhabited, and a big burial place was founded here and there, probably after the devastation due to severe famine and invasion of Geruls (AD 267) . After the catastrophic earthquake in AD 522, which hit Olympia as well, the city decreased in its northeastern bounds and had been abandoned by the 7th century AD when Ilis was in a state of complete decadence and finally disappeared bringing about the end of the Eleian state.