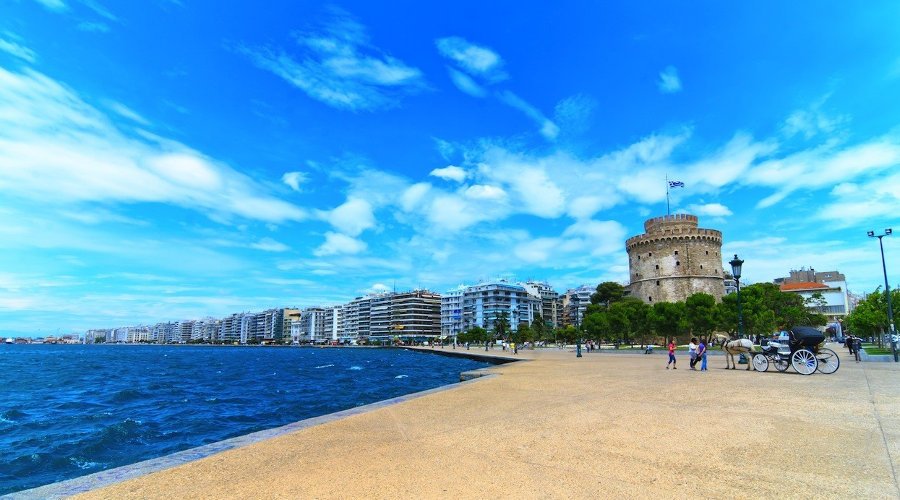 In Thessaloniki you will find many interesting museums and other sightseeings, including the White Tower, the arcaeological museum, the byzantine museum, the castle of Thessaloniki and more.

The Archaeological Museum of Thessaloniki is a state museum of the Ministry of Culture and has been an autonomous unit since 2001. It has been housed in a building, designed by architect Patroklos Karantinos since 1962 and it has been designated as a listed monument of modern heritage, as it is one of the most representative examples of architectural modernism in Greece. Its collections include artifacts and assemblages from excavations conducted since 1912 by the Greek Antiquities Service throughout Macedonia. The museum also houses objects that used to be part of private collections and were later donated to it.

Following a long period of extensive renovation and reorganization of both the exhibits and the storage and the administrative sections, the Archaeological Museum of Thessaloniki reopened its gates to the public in September 2006. During the restoration phase, in conjunction with the extension of the Museum?s premises, the permanent collections were also redesigned and exhibited in a way that would serve the needs of modern visitors.

The Museum's exhibition proposal comprises of seven units, through which the visitors come in contact with the world of ancient Macedonia, its culture and its people:

Our intention was to highlight various aspects of the culture that developed in Macedonia, primarily in Thessaloniki and the neighboring prefectures, covering a period from the dawn of prehistory to late antiquity (i.e until the first centuries of the Christian era).

Our aim was to organize and present the exhibitions in a completely human-centric way, representing - to the extent allowed by the findings and scientific research - the everyday lives of the people that used to inhabit this region of Greece. To accomplish this, an effort was made to implement the principles of modern museology. A large team o scientist, technicians and administrative staff all work to this end. The Archaeological museum of Thessaloniki aims to be an institution that promotes culture, learning, education, science and communication. Within this framework the museum offers educational programs, presents periodic exhibitions inspired by themes both from the ancient and modern culture, supports archaeological research, and organizes themed workshops, lectures, seminars, and a variety of programs and events for all audiences.

The Museum of Byzantine Culture in Thessaloniki is one of the finest museums in the world devoted to Byzantine art and civilization, rivaled only by the Byzantine and Christian Museum in Athens. Thessaloniki's impressive collection includes many Byzantine and early Christian frescoes, icons and artifacts.

The museum contains an excellent permanent exhibition that is beautifully lit and presented in 11 rooms. About 2,900 objects are presented in chronological order from Late Antiquity (3rd-4th century) to the Fall of Constantinople (1453), with some later artifacts representing the continuation of Byzantine culture included as well.

The White Tower, the landmark of Thessaloniki standing on the city's waterfront, was once the south-east tower of a large fortification. According to travelers' descriptions and old representations of the city, the section of the wall along the seafront, which was demolished in 1867, had three towers; the White Tower was the one at its east end where it joined with the east wall. Its exact date is uncertain, but it was probably built in the fifteenth century after the conquest of Thessaloniki by the Turks, to replace a Byzantine tower mentioned by Eustathius, Archbishop of Thessaloniki, in his description of the 1185 siege of the city by the Normans. Throughout its long history the tower's name and use changed several times. It was called the 'Fortress of Kalamaria' in the eighteenth century, and the 'Tower of the Genitsaroi' or 'Bloody Tower' in the nineteenth. In 1890, a convict whitewashed the tower's walls in exchange for his freedom, hence the name 'White Tower'. After the liberation of Thessalonike in 1912, the tower became public property. During the First World War it housed the allied forces' communication centre, and in 1916 its first floor served as storeroom for the antiquities excavated by the British in their sector. It was also used for the city's anti-air defence, as a meteorological laboratory of the University of Thessaloniki and as base for the city's navy scouts, the last to occupy the premises before the building's restoration. The famous White Tower caf? and theatre stood near the tower in the early twentieth century, but both were demolished in 1954 when the surrounding park was enlarged.

The six-storeyed cylindrical tower is 33.90 metres high and 22.70 metres in diameter. The spiraling staircase, a hundred and twenty metres long, is tangent to the exterior wall, leaving a central core of 8.50 metres in diameter. Each floor comprises a central circular room surrounded by smaller rectangular rooms built in the girth of the exterior wall. Only the top floor has a single circular room and an observation room which affords spectacular views of the city and the sea. Amenities such as fireplaces, ventilation shafts and small latrines connected to a sewage system, indicate that the tower was not just used for defense but also as barracks. Until the early twentieth century the tower was surrounded by a low octagonal enclosure with three octagonal towers. Inside the enclosure were a dervish contemplation space, gun powder storerooms and a water cistern; over the gate a Turkish inscription mentioning that the tower of Leo was built in 1535-1536 probably refers to the construction of the enclosure.

The Castle of Thessaloniki, also known as Heptapyrgion or Yedi Kule, is located on a hill above the Old Town (Ano Poli). Its location gives gorgeous views to the city, the port and the Aegean Sea.

The Castle of Thessaloniki was built on the spot of the ancient Acropolis, founded by Cassander in 316 B.C. The walls of the castle, that are still visible today, date from the 4th century A.D. when the Byzantine emperor Theodosius I fortified the town. Many buildings and towers were constructed all along the Byzantine period, till the town was conquered by the Ottomans in 1430. Few years later in 1444, the castle was renovated, old buildings were destroyed and more towers were built. In fact, the Castle has ten towers in total, although its name Heptapyrgion means seven towers.

Till the 1890s the Castle was the seat of the garrison commanders and then it was turned into a prison till 1989. In fact, this prison was known as a severe place of torture. Many political opponents were lead there during the Metaxas Regime (1936-1941), the Axis Occupation in Greece, the Greek Civil War (1946-1949) and the Regime of the Colonels (1967-1974). In fact, the prisons of Yedi Kule were frequently mentioned in the underground rebetika songs. After the damages that wars, earthquakes and time have caused, the Castle of Thessaloniki is today under restoration but open to visitors.

Perhaps the grandest church in Greece, the enormous, 5th-century Church of Agios Dimitrios honours Thessaloniki’s patron saint. A Roman soldier, Dimitrios was killed around AD 303 on the site (then a Roman bath), on orders of Emperor Galerius, infamous for persecuting Christians. The martyrdom site is now an eerie underground crypt , open during the day and for the special Friday-night service, which can be attended. In 1980, the saint’s relics were returned from Italy, and now occupy a silver reliquary inside.

The Ottomans made Agios Dimitrios a mosque, plastering over the wall frescoes. After the 1913 Greek reconquest the plaster was removed, revealing Thessaloniki’s finest church mosaics. While the 1917 fire was very damaging, five 8th-century mosaics have survived, spanning the altar.

The area from Koudouriotou to Diamanti streets and from Hiou to Lemnou streets is known as Ladadika. The area is what remains of the Jewish part of the city. It is characterized by its beautiful surroundings that help you get a feel of how was Thessaloniki before the great fire of 1917. Currently can find many nice bars, restaurants and you can certainly feel why it has become one of the city’s focal points in the nightlife of Thessaloniki. Nevertheless, it is always a great area for eating traditional greek foods specially cooked with the influence of the immigrant element that used to exist.

The places worth visiting are: