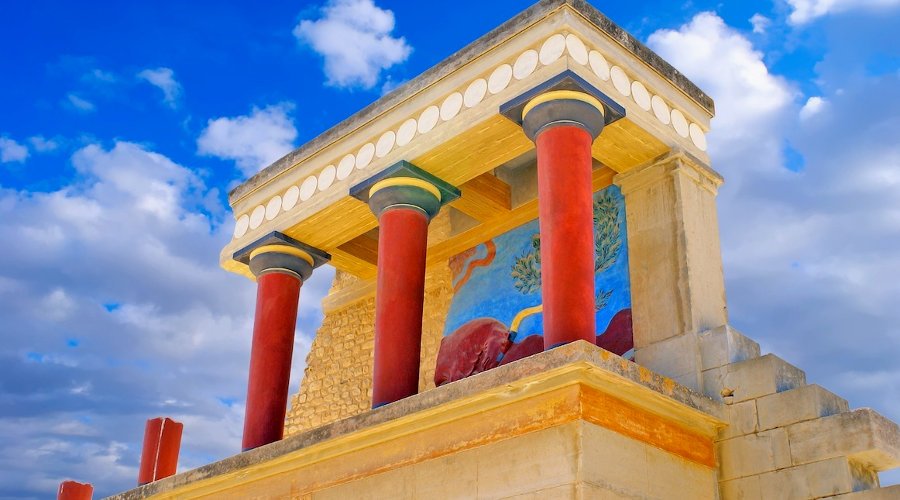 Crete is the largest island in Greece, and the fifth largest one in the Mediterranean Sea. Here, the visitor can admire the remnants of brilliant civilizations, explore glorious beaches, impressive mountainscapes, fertile valleys and steep gorges, and become part of the island’s rich gastronomic culture.

Crete is, after all, a small universe teeming with beauties and treasures that you will probably need a lifetime to uncover!

Crete is divided in to four prefectures.

The region of Chania (Haniá), on the western side of the island, is dominated by the impressive White Mountains (in Greek: Lefká Óri) and its famous National Park, which occupy the largest part of the region.The Prefecture of Chania provides tourist services and activities of all kinds, satisfying all the choices. The city of Chania maintains unaltered all of its characteristics, from the time of the Venetian Rule up until today.

The largest and most densely populated region on the island of Crete is Heraklion (Iráklion). Nestling picturesquely among two imposing mountain ranges – Ídi (Mt Psiloritis) to the west and Dikti (Lasithiótika mountains) to the east– Iráklion boasts exceptional archaeological treasures, significant coastal settlements, a series of picturesque villages, vast valleys with olive groves and vineyards as well as the best organised tourist infrastructure in Crete. A unique combination of urban scenery and natural wealth makes the region of Iráklion an appealing all-year-round destination.

Lasithi (Lassíthi) region. Welcome to the easternmost and least mountainous region of Crete, where the population resides in four semi-urban centers: Áyios Nikólaos, Ierápetra, Sitía and Neápoli. The mythical palm tree forest of Váï, the Gulf of Mirabello, the windmills on the Plateau of Lassíthi (the largest in Crete), beaches lapped by crystalline water, beautiful cities and luxurious hotel resorts all make up a rather fascinating world.

Due to its geographical position between Africa, Europe, and Asia Minor and due to its mild climate, Crete became a center of culture as early as Neolithic times. The first prehistoric settlements appeared in Crete around 6000 BC while in 2600 BC settlers who knew how to craft bronze arrived in Crete. It was then that the illustrious course of the Minoan Civilization began, reaching its peak around 1950 BC with the erection of the imposing palaces in Knossos, Faistos, and Malia.

Mythology has it that it was in a cave of Crete where the goddess Rhea hid the newborn Zeus.  In that cave, Zeus was brought up by the nymphs while the demonical Kouretes would strike their shields loudly so that Cronus may not hear the crying of the baby Zeus and eat it.  It was also to Crete that Zeus, disguised as a bull, took Europa so that they may enjoy their love together.  Their union produced a son, Minos, who ruled Crete and turned it into a mighty island empire of the seas.  In Minoan times, even Attica would pay a tribute tax to Crete, until Theseus, the Athenian prince, killed the Minotaur.  The truth behind the myth is the existence of a mighty and wealthy kingdom and of a civilisation that is considered the most ancient one on the European continent.

In 1450 BC and again in 1400 BC the Minoan Civilization was successively devastated possibly due to the eruption of the volcano of Thera and was eventually led to its decline.  In the wake of the devastation the Dorians arrived to settle on the island.  They were later followed by the Romans.  After the Roman rule, Crete becomes a province of Byzantium until the arrival of the Arabs who occupied the island for an entire century (824-961 BC).  During the Arab domination, Crete became the lair of pirates who were based out of Handakas, present day Heraklion.

Next, Crete fell under Byzantine rule again until the arrival of the Venetians who occupied the island for approximately 5 centuries leaving their stamp on the island’s culture.  After the fall of Handakas in 1669, the Turkish Occupation began marked by ferocious and bloody uprisings.  At the end of the 19th century Turkish rule came to an end.  The Cretan State was created with the King of Greece as the island’s High Commissioner. In 1913, Crete was finally joined officially with Greece.