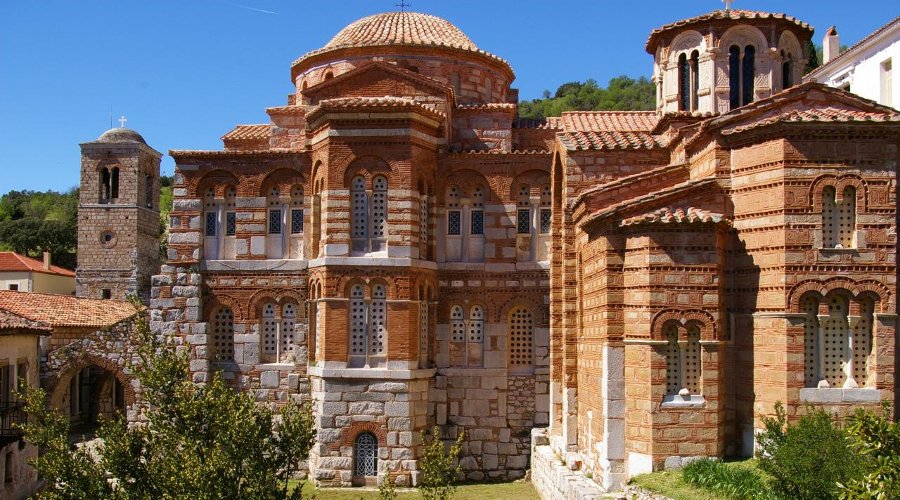 On your way up to the slopes of Mt. Parnassus and the archaeological site of Delphi, about 13 km before the town of Arachova, leave the main road and turn towards the village of Distomο and Styri. Keep driving for about 9 km and the road will bring you to one of the most impressive monuments in the Mediterranean Sea:

the monastery of Hosios Loukas, situated in a picturesque valley teemed with olive trees. Byzantine monasteries are built in sites characterized by amazing natural beauty, always in harmony with the surrounding landscape, following the example of the ancient temples.

In a landscape untouched by time, you will discover two magnificent Byzantine churches decorated with frescoes and mosaics, with their characteristic golden background (10-11th century AD). The Byzantine abundance of the monastery still functioning today was recently brought to light due to a successful restoration project. The monastery was founded around the middle of the 10th century AD by the monk Loukás from Stýri. His relics are exhibited in the Katholicon (main church of the monastery). They were stolen by the Crusaders during the 13th AD and kept in the Vatican for centuries.

The two churches of the monastic complex are built next to each other, and there is access from one to the other through a passage. The most ancient one is the church of the Virgin Mary (middle of the 10th century AD), while the largest one was built a little later (early 11th century AD), and it is dedicated to the founder. The church of Virgin Mary is clearly one of the masterpieces of Byzantine architecture. It is the best example of the "cloisonné" style of masonry, according to which the ashlar blocks of stone are surrounded by bricks, forming lines of decorative motifs. It became the prototype for all the classical Byzantine churches of southern Greece.

If the church of the Virgin Mary impresses us with its external appearance, the Katholicon of the monastery surprises us with the multicoloured marble revetments, while the ceilings are illuminated by the mosaics with the golden background (11th century AD). The scenes are religious, chosen and designed according to the strict rules followed by the artists until nowadays. Byzantine painting doesn’t mean, though, strictness and lack of movement. The Byzantine artists never ceased to be inspired by ancient art, and its harmonious proportions and elegance. Byzantine art is the only form of European art that began with the end of antiquity and reached its conclusion with the Renaissance, connecting the ancient world with the recent history.

Before you leave the monastery don’t forget to visit the crypt, located under the Katholicon. There are no mosaics here but paintings and their subjects are similar, though the style is different, more sentimentally charged and more expressive, clearly proving the wealth and variety of Byzantine art.