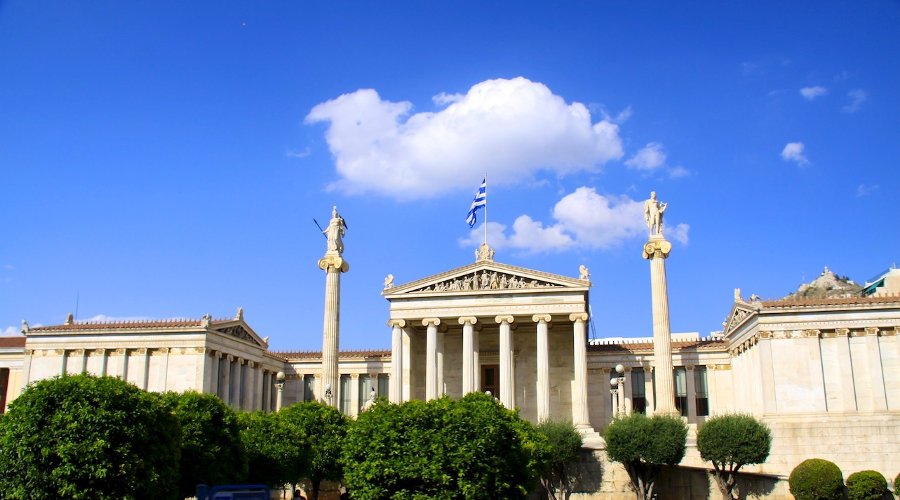 The Academy of Athens consists of aesthetically distinct parts that form a harmonic ensemble of built mass. A corridor connects the two lateral wings to the main body of the building, which -in its proportions of line and mass- is set-off by its Ionian-style entrance and its big pediment. The entrance has elements originating from the eastern side of Erechtheion, on Acropolis. The predominant material on the facets is marble. Overall, the building is a characteristic example of mature Neoclassicism.

The University of Athens forms part of the so-called "Neoclassical Trilogy" of the City of Athens: Academy - University - Library. It consists of a group of built masses that shape up a double "T", with two symmetrical courtyards. The facade is strictly symmetrical to the arcade of rectangular pillars, set-off by an Ionian-style entrance. The bases of the columns and the capitals of the entrance are perfect replicas of the equivalent found in the Propylaea of Acropolis. The building follows the basic aesthetic rules of early Neoclassicism, while at the same time is adapted to the Greek Mediterranean climate. The outside statues complete the entrance's composition, that is evidently distinguished to "base," body" and "crowning" parts.

Today the building serves as headquarters of the University of Athens, housing the offices of the Rectorate, the Juridical Department, the Archives and the Ceremonial Hall for official ceremonies of national esteem that refer to the University community.

By a ministerial decree of 1952, the building was identified as preserved monument "in need of special protection" according to the relevant 1950 Law.

The National Library consists of three solid parts, out of which the one in the middle -which is also the biggest- houses the Reading-Room. To enter this part, one has to pass through a Doric-style row of columns (designed after the Temple of Hephaestus in the Ancient Agora of Thission, which served as its model), after climbing on a monumental curved double staircase of a Renascence style. The Reading-Room, surrounded by Ionian-style columns, is covered by a glass ceiling. The cast-iron constructions of the bookstands were referred to as exceptional back in their time. In general, the building is considered to be a characteristic sample of mature Neoclassicism.

Tweet
More in this category: « Tomb of the Unknown Soldier Mesogeia Vineyards »