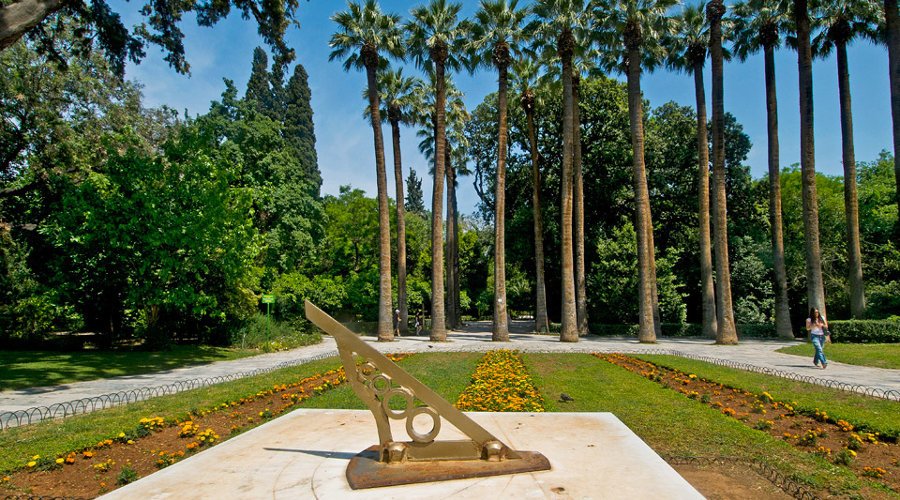 Behind the Tomb of the Unknown soldier on Amalias street, at the top of Syntagma (Constitution) Square is what my brother calls "Athens greatest treasure". Formerly The Kings Garden, now the National Garden, it is like a tropical paradise right in the middle of the concrete jungle of Athens. You can spend hours wandering around the shaded pathways past flowers and trees and ducks. There are two duck ponds and a duck population that has gotten completely out of control. There are the remains of ancient Athens scattered around and several dozen cats. The National Garden is a great place to escape the noise and heat of Athens. Especially if you like ducks.

In what used to be the private garden of the king an event took place that changed the course of history for Greece and made it what it is today, a small country in the eastern Mediterranean, instead of a large country spread over two continents with its capital in Constantinople. This event was a the bite of a monkey.

Athens National Gardens After the first world war things were looking up for Greece. The Germans had been defeated and Turkey which had been allied with them, was falling apart. Under Eleftherios Venizelos, Greece's greatest statesmen and one of the most intelligent and respected leaders in Europe, the country had tripled in size and it's army controlled Smyrna on the coast of Asia Minor, an international city full of Greeks who had lived there for thousands of years, as well as many other towns on the coast which were also full of Greeks. The Greek army had the support of the European powers and what was left of the Turkish army was disorganized and on the run. It seemed that Greece would achieve it's dream of the megalo idea: the Great Idea, a greater Greece with it's capital in Constantinople (Istanbul): A second Byzantine Empire. Then on Sept 30th 1920, while walking in the gardens, King Alexander was bitten by a monkey. He died three weeks later. His brother Constantine, a Germano-phile who was unpopular with the European powers, returned to Greece and in elections the Royalists triumphed over the Venizelists.

To make a long story short, the king removed the Venizelists officers from the army just about when the European powers withdrew their support. The French, sensing a change in the winds, began to supply weapons to the young Turks, led by Mustapha Kemal, also known as Attaturk . The Greek army overextended in an ill-advised plan to take Ankara was soundly routed and retreated back to the coast of the Aegean sea bringing with them every Greek from every village, who feared retribution by the Turkish army in hot pursuit. Smyrna was burned to the ground and thousands of Greeks and Armenians were massacred while the British, French, Russian and US Navy just watched from the harbor, waiting to do business with the new Turkish Government. The burning of Smyrna and the evacuation of a million and a half Greeks and Armenians put an end to three thousand years of Hellenic and Christian civilization in Asia Minor and their flood into Athens and the cities and towns of Greece created a refugee problem beyond the scope of any country, much less a small poor one like Greece. Even today the neighborhoods created to house these refugees like Nea Smynri and Kokinia, still have a character of their own.

Athens National gardens zoo But in the National gardens you can forget about history and wars and the ills of modern society and take in the plants, flowers and trees that have been collected from all over the world. There is even a botanical museum on the grounds. In the old days the gates of the park were locked and the people of Athens could only stroll around Zappion, the gardens being the realm of the king and his family. Now it belongs to the people which is as it should be. There is also a small zoo featuring wolves from Bulgaria, strange antelope like creatures, monkeys, peacocks, hawks, buzzards, a lion, parakeets, canaries and goats, all sharing their cages with the ducks. (Be sure to see the real Athens Zoo too)

Athens national gardens ducks You can walk along the paths admiring the exotic fauna and the ducks. There is even a small cafe near the Irodou Atikou street called O Kypos where you can get a nice frappe, an ouzo and mezedes, and enjoy the afternoon while you feed your leftovers to the ducks who come to your table begging for food.

There is also a very nice duck pond where you can feed them but be careful that you don't become a meal yourself. We always save our bread from lunch to bring here, or you can buy doughnuts (koulouria) from a little man near the large pond.

Athens National Gardens turtles Besides the ducks there is also a water turtle population that seems to be on it's way to getting out of control and space has become so hard to find they have begun stacking themselves. While less of a problem than the ducks because of their inability to escape the National gardens or even their pond, the abundance of these turtles raises this interesting question. Are these the same turtles that used to be sold in pet stores in America with little plastic palm trees? And if they are why did they leave America and come here? The good news is that according to the US Dept of Agriculture in their travelers tips pamphlet, any American can import up to six turtles as long as the shells are 4 inches long and they are for personal use as pets and not for commercial purposes. But don't grab one of these or you may get arrested. These turtles are property of the Greek state. That goes for the ducks too.