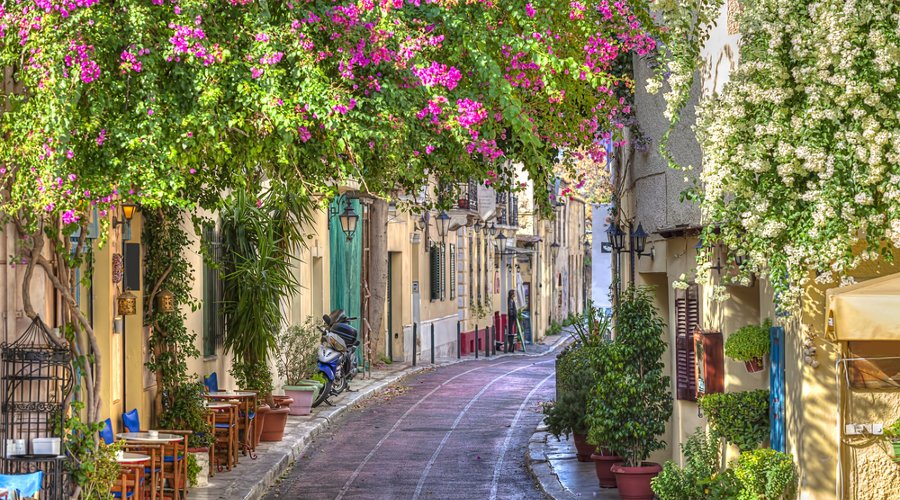 Plaka is the historic heart of Athens, located to the north of the Acropolis. Next to Plaka are the districts of Monastiraki and Thissio, popular with tourists and Athenians alike.

Gentrified during the 1990s and now very popular with tourists, Plaka is a charming historic district at the foot of the Acropolis, with its restored 19th century neoclassical homes, pedestrianized streets, shops and restaurants, and picturesque ruins from the city's Roman era. Thissio, to the west side of the Acropolis, is very similar and now houses many restaurants and cafes. Between the two is Monastiraki, a very bohemian district increasingly popular with tourists, with stores selling a variety of items including antiques, cookware, souvenirs, arts and crafts, movie posters, punk culture, funky clothing, and pretty much anything you can think of. Another part of Plaka is Anafiotika and is located on the northermost place. There you will find the first university of Athens before it was relocated in central Athens. Its an oasis of calm and quietness, and there are many green spaces which are part of the green space of Acropolis.

Plaka's boundaries are not precisely defined. Clear borders are the Ancient Agora and Plateia Monastiraki on the west, the Acropolis and Dhionysiou Areopayitou street on the south, the Temple of Olympian Zeus and Leoforos Amalias on the south-east, and the west part of Mitropoleos street, up to the cathedral on the north (but Mitropoleos street and Leoforos Amalias, though boundaries, shouldn't be considered part of Plaka, since they have a modern and fairly non-descript atmosphere). The north-eastern and eastern boundaries are a bit less well defined, but if you're south of Apollonos street and west of Nikis street you'll probably feel like you're still in Plaka.