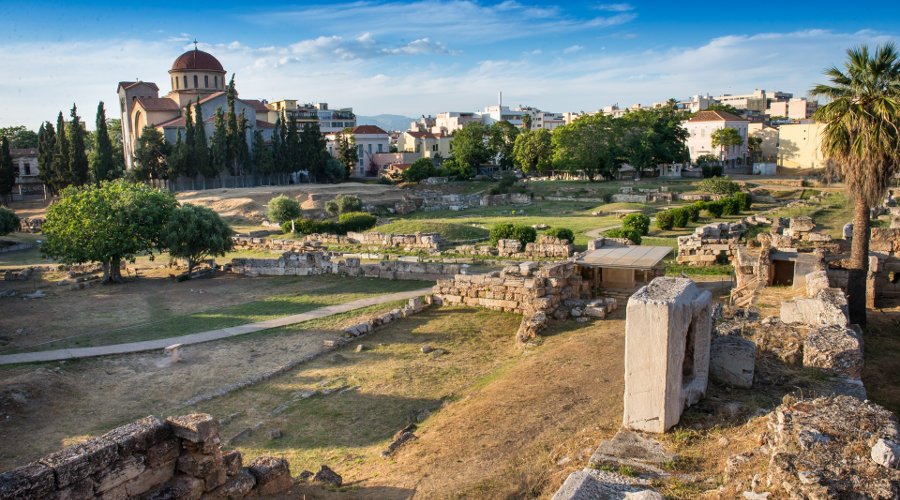 The archaeological site of the Kerameikos, between Ermou, Peireos, and Asomaton Streets, is a small part of the ancient Attic Deme of Kerameon, one of the largest demes of ancient Athens, located on the northwest edge of the city. As suggested by its name, the Kerameikos (from the Greek word for pottery) was a settlement of potters and vase painters, and the main production centre of the famous Attic vases. Those parts of the Kerameikos that were located near the riverbank suffered continuously from the overflowing river, and so the area was converted into a burial ground, which gradually developed into the most important cemetery of ancient Athens.

Potters were drawn to the Kerameikos by the clay deposits of the Iridanos, the small river that runs through the Kerameikos archaeological site. The river lay buried for centuries under eight or nine meters of landfill (level of Ermou Street), but was uncovered again in the 1960's during the archaeological excavations.

The earliest tombs at the Kerameikos date from the Early Bronze Age (2700-2000 BC), and the cemetery appears to have continuously expanded from the sub-Mycenaean period (1100-1000 BC). In the Geometric (1000-700 BC) and Archaic periods (700-480 BC) the number of tombs increased; they were arranged inside tumuli or marked by funerary monuments. The cemetery was used incessantly from the Hellenistic period until the Early Christian period (338 BC until approximately the sixth century AD).

The most important Athenian vases come from the tombs of the Kerameikos. Among them is the famous “Dipylon Oinochoe”, which bears the earliest inscription written in the Greek alphabet (second half of the eighth century BC). The Kerameikos excavations began in 1870 under St. Koumanoudis of the Archaeological Society of Athens. They continued in collaboration with the German archaeologists A. Brueckner and F. Noack over the next few decades, and are carried out by the German Archaeological Institute since 1913.

The site is regularly cleared of undergrowth. A set of projects, such as the construction of a network of visitor paths, the restoration of buildings, the re-opening of the Kerameikos Museum, the placement of informative signposts, and the construction of an amphitheatre, were completed in 2004. Moreover, recent expropriations of neighbouring land plots are expected to expand the site and allow further excavations to take place in the future. The site's small museum houses the finds from the Kerameikos excavations.