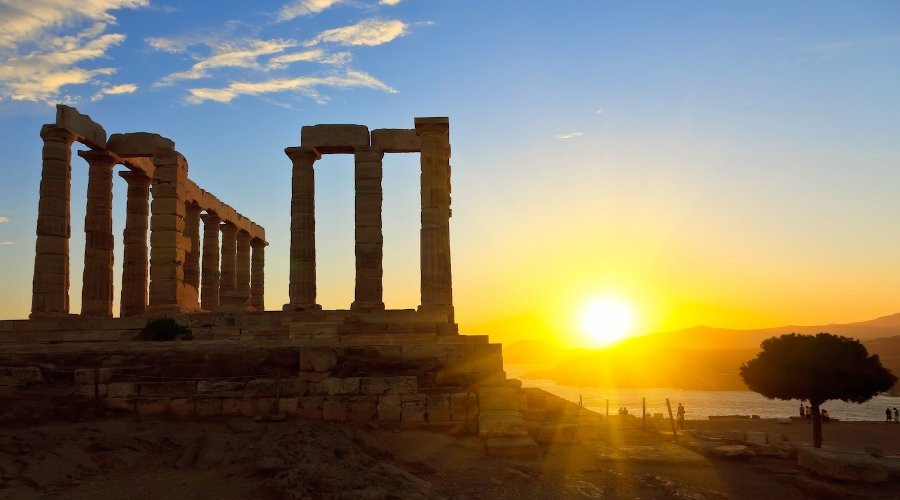 The Temple of Poseidon in Sounion Athens: Cape Sounion is found about 70 km to the south-east of Athens, on the southernmost tip of Attica peninsula. According to the myth, this is the site where Aegeus, king of Athens, fell into the sea because of a misunderstanding. Theseus, the son of Aegeus, had traveled to Crete to kill Minotaur, the legendary monster who lived in the palace of Knossos, and to release Athens from the obligation to send seven boys and seven girls every year to the king of Crete, only to be eaten by Minotaur.

Theseus thus had said to his father that if he killed Minotaur, he would hoist a white sail on the return home. Theseus indeed killed Minotaur and was returning to Athens safe and well but unfortunately, he forgot to hoist white sail and had a black sail on his mast. Aegeus saw the black sail from Cape Sounion and believed that his son was dead. His despair made him fall into the sea and, later on, the Athenians gave the sea his name, the Aegean Sea.

Some of the archaeological items found in this site date from as early as the 8th century BC, while Herodotus affirms in his documents that in the 6th century BC, the Athenians used to celebrate a quadrennial festival at Cape Sounion. In Homer's Odyssey, Menelaus while returning from Troy, stopped at this temple where he buried Phrontes, his helmsman.

In fact, this place was emotionally important for the Athenians, as this was the last point of their land that the ancient Athenian sea farers and warriors could see when they sailed away into the Aegean and around the Mediterranean Sea and also this was the first spot of Attica to see when they returned from the journey or war. That is why the Athenians decided to built a temple there, dedicated to Poseidon, the god of the sea, to give them nice sea trips so that they would come back home.

The first version of the temple was built in the archaic period but it was destroyed by the Persians in 480 B.C, in the second Greco-Persian War. Pericles, the famous Athenian leader, rebuilt the temple of Poseidon probably around 440 B.C. but only some columns of it stand till today. A 5m tall statue of Poseidon used to stand inside the temple, but today only a part of it survives and it is displayed in the Archaeological Museum of Athens. The frieze of the temple was made of marble from Paros island and it depicted the legends of Theseus. On one column, you can see the word "Byron" on it, engraved by the famous poet Lord Byron during a visit in 1810.

Many daily excursions are organized to Cape Sounion from the centre of Athens. It is considered among the sites you should definitely visit if you come to Athens. Apart from the archaeological remains, Cape Sounion is also famous for its beautiful sunset and the great views to the Aegean Sea. This site can be accessed through a scenic highway that crosses many residential resorts, like Glyfada, Vouliagmeni and Varkiza.

Tweet
More in this category: « Temple of Olympian Zeus Kerameikos »