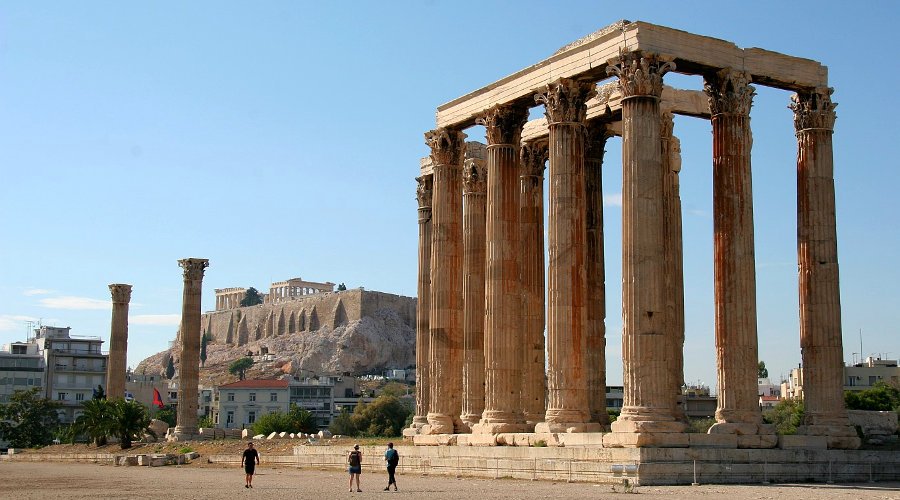 Located in southern Athens, between the Acropolis and the Ilissos river, the Olympeion was the sanctuary of Olympian Zeus. Here stands one of the greatest ancient temples of Zeus and, according to Vitruvius, one of the most famous marble buildings ever constructed. The sanctuary's foundation is attributed to mythical Deukalion. The site also comprises the temple of Apollo Delphinios - the sanctuary of Apollo Delphinios was traditionally associated with Theseus - and a tripartite building with a south courtyard of ca. 500 BC. The latter has been identified as the Delphinion Court, which was allegedly founded by Aegeas.

The site of the Olympeion was a place of worship of chthonic deities and of ancient Athenian heroes Athens since prehistory. Peisistratus the Young initiated the construction of a monumental temple in 515 BC, but failed to complete his project because of the fall of tyranny. The temple remained unfinished for approximately 400 years, until Antiochus IV Epiphanes resumed its construction in 174 BC. It was completed in AD 124/125 by Emperor Hadrian, who associated himself with Zeus and adopted the title of Olympios. A large poros temple dedicated to Apollo Delphinios was also built on the site around 450 BC. It was abandoned in the third century AD. The temple was Doric peripteral with two columns in antis on the front and back. In the second century AD, Hadrian built a Roman temple of the Doric order, with a built enclosure and an outdoor altar, probably of Kronos or Rea. A Roman peristyle for the meetings of the Chapter of the Panhelleloi was also constructed in the same area, and a possible residence of a prominent member of the Chapter was added on the rock of the Olympian Land in the Late Roman period.

A new city wall, the so-called Valerian Wall, was erected under Emperor Valerius in the third century AD, possibly on the same line as the Classical Themistoclean Wall. A large Late Roman cemetery developed outside the wall in the fourth and fifth centuries AD, and an extensive Byzantine settlement with many houses and workshops, including tanneries and an olive press, developed over the ruins of the Classical temple in the eleventh-twelfth centuries. This settlement had at least one main street, the so-called Ancient Street.

E. Penrose and G. Weltet excavated the sanctuary of Zeus in 1883-1886 and in 1922 respectively. Excavations around the temple were carried out by the Archaeological Society of Athens in 1886-1907 and by the architect Ioannis Travlos in the 1960's. The archaeologist Ioannis Threpsiadis also excavated here.

The area south of the Olympeion comprises the Parilissia Sanctuaries (sanctuaries located by the Ilissos river) and was unified with the existing archaeological site of the Olympeion during the Unification of the Archaeological Sites of Athens project. It is currently open to the public. The only access to the site of the Olympeion and the Parilissia Sanctuaries is from the gate house on Vasilissis Olgas Avenue. Systematic archaeological investigation by the Third Ephorate of Prehistoric and Classical Antiquities in the area south of the Olympeion from September 1999 until June 2004 (Project for the Unification of the Archaeological Sites of Athens) aimed to promote and enhance the monuments through systematic conservation and minor restorations, and to recondition the site through the removal of debris and undergrowth and the creation of rain water drainage and necessary facilities for visitors. The unified archaeological site comprises two new guard-posts, one on Vasilissis Olgas Avenue and another on the banks of the Ilissos, near the church of Agia Fotini, as well as sanitary facilities (also suitable for the physically challenged), a gift shop, and a storeroom.